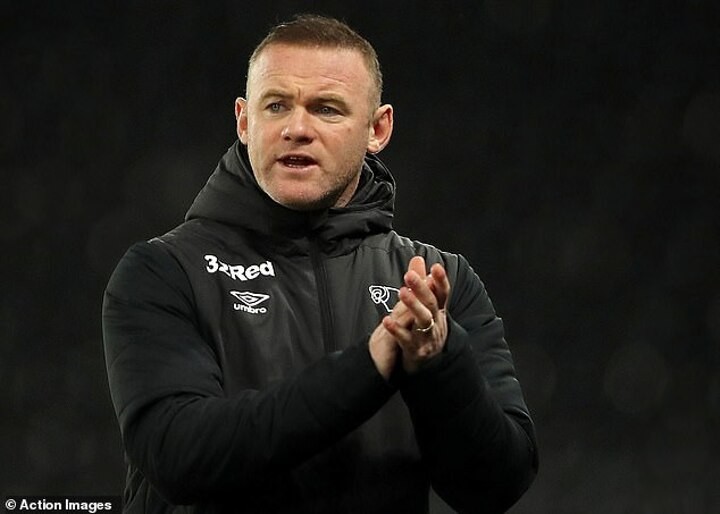 Wayne Rooney has revealed he spoke to Steven Gerrard hours before agreeing to follow his former England team-mate into the hazardous world of football management.

Rooney officially called time on his outstanding 18-year playing career when he signed a two-and-a-half-year deal with troubled Derby after an impressive spell as interim boss.

The situation could hardly be trickier: the Rams are fighting relegation from the Championship and their prospective new owners have yet to complete their protracted takeover bid, meaning the players have not been paid their December salaries.

But Rooney says he has been assured the takeover led by Sheik Khaled bin Zayed Al Nehayan will go through and the players will be paid in full.

He has no doubt that moving to the dug-out – rather than the pundit's chair – is the correct decision after watching Rangers manager Gerrard, among others, make a positive impression.

'It is great to see the likes of Steven Gerrard, Frank Lampard, myself, Scott Parker and John Terry move into coaching and management,' said Rooney. 'People can earn a lot of money doing TV work and speak about players and managers from a studio, so it's great to have a core of young former England players rolling their sleeves up and trying to dig in and take the opportunity given them.

'I spoke to Steven on Wednesday, he's a good friend of mine and has gone down the managerial route at a young age.

'We approach the game in different ways but there's no harm in speaking to people about their experiences and what they've been through. Hopefully now I can start to write some history and have a successful managerial career.'

When he was temporarily promoted to manage the team after Phillip Cocu was sacked in November, Rooney hinted heavily that he had played his last professional game. He has never included himself in a matchday squad and has been running training sessions rather than taking part in them.

But the 35-year-old took until now to confirm his decision, meaning that Derby's 3-0 defeat at Middlesbrough on November 25 was his 883rd and final senior appearance.

After making his debut as a 16-year-old for Everton in 2002, Rooney became the record goalscorer for both Manchester United and England. He won 12 major trophies – plus four Community Shields – while at Old Trafford and also represented his country in six major tournaments.

When Rooney left United in 2017, he returned briefly to Everton before playing in the United States for DC United. He agreed in summer 2019 to join Derby, initially as player-coach.

'Of course I'll miss playing but time waits for no man and I have had my time,' he said. 'It is time for the younger generation to have theirs and for me to help players become better.

'I have been very lucky to play for some massive teams. It was my boyhood dream to play for Everton and then the 13 years at United were the highlight of my career, with the trophies we won.

'Winning my first Premier League medal in 2007 was a huge moment, it was the start of a real run of dominance. A big moment was also winning the FA Cup in 2016. I'd lost two finals but to win it at Wembley as captain was very special.

'I felt the time was right to stop playing and this moment has been coming. I've sat down and thought about it over the last two months, and I feel my future is in management. I've got a new excitement and a buzz to fulfil my potential as a manager. There were questions I asked of the club and if they hadn't been answered, I wouldn't be here. It's a big chance for me to try to lead this club back to the glory days.'