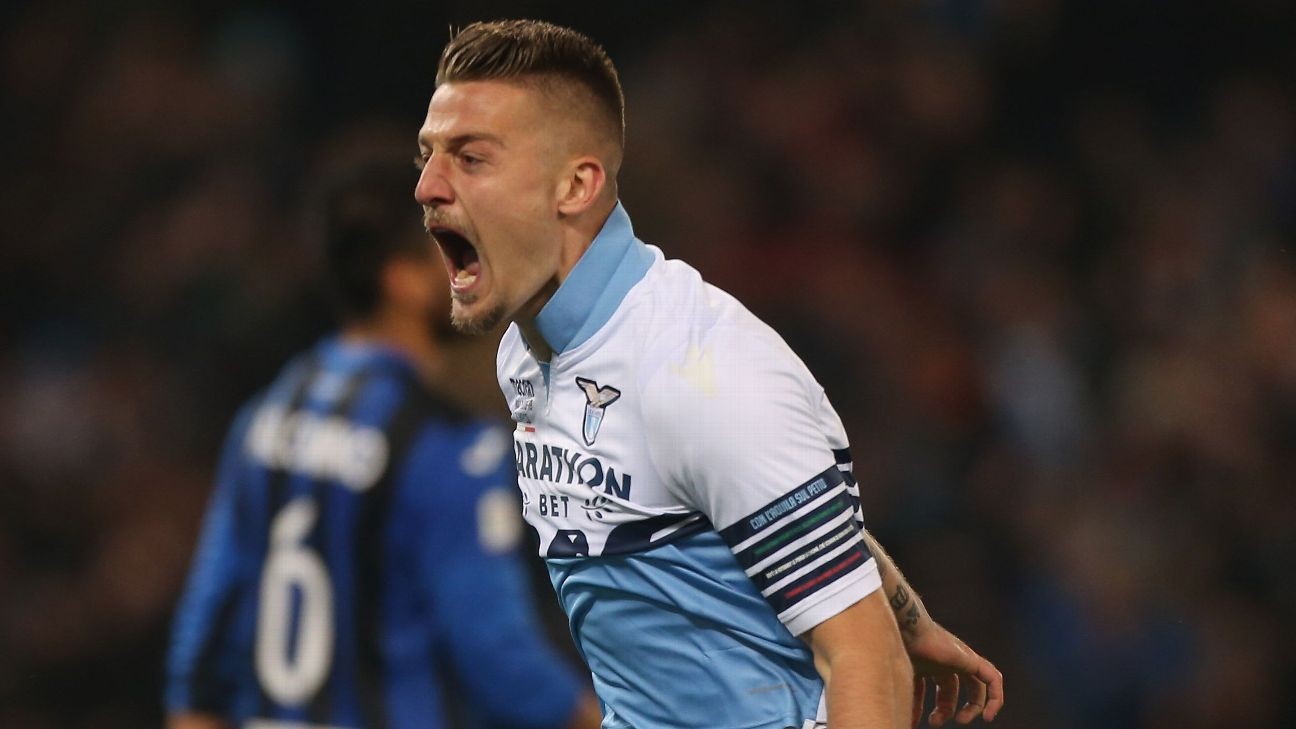 Julien Laurens has reached his wits' end with Antoine Griezmann's transfer saga and says 'the sooner release clause is paid, the better for all of us."

The summer transfer window is in full swing, but there's plenty of work to be done given the flurry of international tournaments that have occupied the attention of some of this summer's biggest targets. Which players are likeliest to move before the 2019-20 campaign? David Amoyal rates the top rumours from around world football in the latest edition of our summer Rumour Rater.

While the Serbia international is coming off an uneven season, he won't be sold at a discount from last summer's price tag since Lazio are in strong financial shape (at least relative to other Serie A clubs), he's still only 24 and was named Serie A's best midfielder last season. President Claudio Lotito is looking for a return of €90m, but while Manchester United are one of the few clubs who could afford that, they have yet to take concrete steps towards signing him. This would likely change should they sell Paul Pogba to either Juventus or Real Madrid, who are now favourites to sign the France midfielder.

Manchester United could rekindle their interest in Sergej Milinkovic-Savic if Paul Pogba leaves.

Following Ignazio Abate and Cristian Zapata's departure after their contracts expired, the Rossoneri are in the market for a centre-back, a need that is intensified by the question marks surrounding Mattia Caldara's fitness. Milan have met multiple times with the Croatia defender's agent, but it remains to be seen if they'll be willing to meet Liverpool's price of tag of €25m, considering their Financial Fair Play restrictions.

After spending lavishly in the first phase of the transfer window, Real Madrid are focused on outgoing moves. The Colombia international is determined to reunite with Carlo Ancelotti, but at the moment Napoli are only offering to pay €10 million for a one-year loan with an option to buy in 2020. Atletico, on the other hand, are willing to offer €40m to acquire him on a permanent basis, but Real Madrid are very hesitant to potentially reinforce their crosstown rivals after already selling them Marcos Llorente. However, Atletico entering the race has sparked Napoli into action, and they sent their sporting director Cristiano Giuntoli to Spain in an attempt to close the deal.

The Dutch defender's agent, Mino Raiola, confirmed he has an agreement with the Serie A champions on personal terms in a recent interview with Dutch paper De Telegraaf. He also indicated that last year Ajax had agreed to let De Ligt leave in exchange for at least €50m in order to keep him for the 2018-19 campaign, but that now they are looking for a higher return. Juventus are optimistic they can close the deal later this week, since De Ligt is pushing to join, especially after a recent phone call with coach Maurizio Sarri.

With their main defensive target, De Ligt, edging closer to Juventus, PSG are leaving no stone unturned in their pursuit of a possible alternative. A name on the radar of the Paris-based club is that of Barcelona centre-half Umtiti, who struggled with injuries last season. The player, valued by the Blaugrana at €60m, has already made clear that his desire is to stay at the club, but the situation could change should Barca step up their bid to re-sign Neymar. The Catalan club could take advantage of PSG's interest in Umtiti and try to include him in the list of players that could be involved in a proposed deal for the Brazil star.

Coach Unai Emery is especially keen on bringing in more options on the wings in order to reinstate his trademark 4-2-3-1 formation. In this regard, a safe bet could be the Real Madrid youth product, who reportedly comes with a price tag of €35m. The 28-year-old Spaniard, who would have to face a fierce competition for a spot in Los Blancos starting XI, could consider a move to the Premier League to try and boost his hopes of getting into the Spain squad for Euro 2020.

Inter's executive director Beppe Marotta has made it clear that the Argentine striker is no longer part of the club's plans. However, Icardi and his wife/agent Wanda Nara have no intention of leaving Italy, and that limits their choice of viable destinations. Juventus have been monitoring the situation for a while, but they would have to move Gonzalo Higuain's enormous salary off the wage bill first, and Paulo Dybala isn't interested in being involved in a swap, Napoli, on the other hand, are ready to offer Icardi a substantial contract while giving Inter an out to avoid selling their former captain to their fiercest rival.

- When does the transfer window close?
- Anatomy of a transfer: What's real and what's not
- Inside Tottenham's summer spending spree

Icardi isn't the only star set to be on his way out at Inter following the club's decision to get rid of all those prone to causing distractions. Nainggolan has accepted the fact that he's not part of Conte's plans, he's now open to a move to a China where he's being pursued by both Shanghai Shenhua and Dalian Yifang after Barcelona rejected a swap deal involving Arturo Vidal. There doesn't appear to be a significant market for the Belgium international in Europe and a transfer to China would give him a significant contract during the twilight of his career.

The sale of Marko Arnautovic to Shanghai SIPG completely turned the tables in the race between Valencia and West Ham for Uruguay striker Maxi Gomez. The Spanish club were confident that their offer of €15m for the economic rights of forward Santi Mina and the two-year-loan of defender Jorge Saenz would have been enough to persuade Celta Vigo to sell Gomez. However, the proceeds of Arnautovic's sale could prove the extra fuel that the Hammers need in order to meet Celta's asking price of €50m and push the deal over the line.

The Toffees are pondering a move for Atletico Madrid's striker Diego Costa, who is far from an untouchable at the Spanish club, especially after the signings of Joao Felix and Alvaro Morata. While Everton owner Farhad Moshiri would like to make of the Spain international the marquee signing of this transfer window, it remains uncertain whether the 30-year-old would be open to a return in the Premier League.