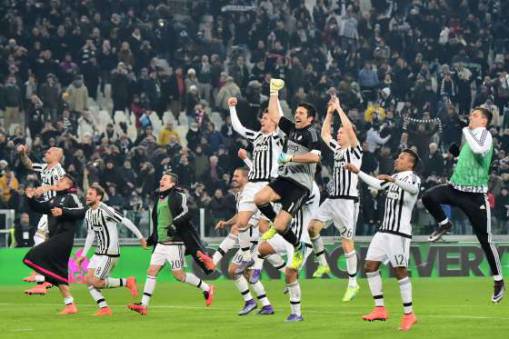 As Juventus clinched a fifth successive Scudetto, the complete story of this Serie A campaign is a little more complex than that, with a number of teams taking turns at the top of the table

Following four straight Serie A titles, Juventus started the 2015-16 season as firm favourites to make it a record-equalling five in a row.

The initial rounds soon illustrated that the season may not be as straight forward as some thought, beginning as one of the most open competitions in recent times.

In round 1 alone, the Bianconeri suffered a shock loss to Udinese at home, Sassuolo surprised many by beating Napoli while the previous season’s runner up, Roma, dropped points to Hellas Verona.

A heavyweight clash in round 2 saw Juventus lose their opening two matches, going 2-1 down to Roma after finishing the match with just nine men.

The Nerazzurri went on to claim top spot following an encouraging 1-0 win in the season’s first Derby della Madonnina while Chievo looked the early season surprise packet following an emphatic 4-0 victory over Lazio.

It took until round 4 for both the Bianconeri and the Partenopei to register their first wins of the season, with the Old Lady claiming a relieving 2-0 victory over Genoa and the Neapolitans demolishing Lazio 5-0.

Meanwhile, Fiorentina had begun to find consistency, with three victories over Genoa, Carpi and Bologna, moving them up into second position by round five.

The top two went head-to-head in round 7, where La Viola completely outplayed their favoured opponents to record a 4-1 win at the Stadio Giuseppe Meazza, thereby overtaking the Nerazzurri into top spot on goal difference.

In another major clash for the round, goals to Lorenzo Insigne and Gonzalo Higuain secured a 2-1 win for Napoli over the struggling Old Lady as doubts were increasingly cast over the Bianconeri’s abilities to challenge for the Scudetto.

Round 6 and 7 saw both Frosinone and Carpi register their first ever top-flight victories over Empoli and Torino respectively, leaving only Hellas Verona winless in the league.

Roma were fast approaching the top of the table with three straight wins, scoring 12 goals along the way, and made no mistake when presented with the opportunity to leap Fiorentina into the lead, defeating Paulo Sousa’s men 2-1 at the Stadio Artemio Franchi.

Meanwhile Juventus, suffered what would be their final loss before embarking on a 15 match Serie A win streak and 26 match unbeaten run, following their loss to Sassuolo on October 28.

Towards the bottom, Bologna had suffered five losses in six matches and stood 18th in Serie A, which was enough to see Delio Rossi receive his marching orders and be replaced by Roberto Donadoni who would soon turn the team’s fortunes around.

In round 11, Inter hosted Roma and edged out the visitors 1-0 with a first-half strike from Gary Medel, joining Fiorentina on 24 points at the top of the league.

In the following rounds, a Paulo Dybala strike helped Juventus defeat AC Milan to jump the Rossoneri into sixth before a Higuain brace enabled Napoli to defeat Inter and jump the Nerazzurri into first.

It was short-lived however after the Partenopei suffered a 3-2 loss to the resurgent Bologna with both Mattia Destro and Higuain picking up a brace for their respective sides.

The Biscione’s victory over Genoa, their eighth 1-0 win of the season, reclaimed top spot and a week later extended their lead to four points with an emphatic 4-0 victory away to Udinese, with Mauro Icardi grabbing a brace.

In the final round of 2015, Lazio was able to produce their first win in eight Serie A matches with a shock 2-1 score line away to the Nerazzurri, who had their lead cut to just one point after Napoli and Fiorentina recorded respective victories.

Despite the setback, it was Inter who would lead the pack into the Christmas break, Juventus sitting in fourth off the back of seven consecutive Serie A victories and Sassuolo emerging as the year’s big surprise in sixth position.