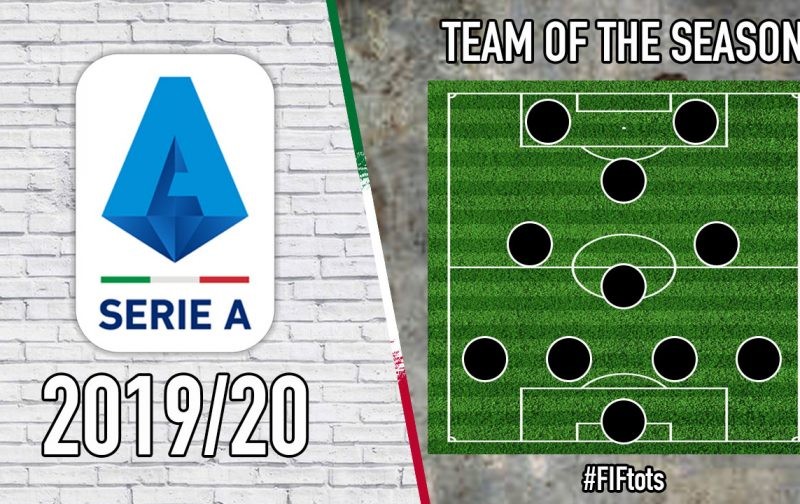 Juventus won their ninth consecutive Serie A but they had Inter, Atalanta, and Lazio challenging them for parts of the campaign and those three sealed the remaining Champions League spots.

Roma finished in fifth place and sealed Europa League action for another season, Udinese had another escape from relegation despite their struggles throughout the campaign, and Hellas Verona were one of the surprises of the campaign with a respectable mid-table finish.

Our Forza Italian Football Team of the Season 2019/20 is deployed with a 4-3-3 system. Let us know your thoughts! The Argentine kept 14 clean sheets for the Zebrette throughout the season but that statistic alone does not do justice to how brilliant the 26-year-old has been for them. Udinese finished 13th in Serie A with 45 points and they had the third-worst attack in the division with just 37 goals, making Musso’s saves more vital. The Friulani were battling relegation for most of the season and the Argentine was the reason they were able to obtain points or avoid further embarrassment. Both his reflexes and anticipation were excellent and his performances showed that he is more than capable of starring at one of Europe’s football giants.

New Bianconeri coach Maurizio Sarri had to do a bit of shuffling of his own as Joao Cancelo had been sold to Manchester City, his replacement Danilo from the English club had trouble adapting, and Mattia De Sciglio struggled to stay fit. Although Cuadrado had been used a right-back sparingly by Sarri’s predecessor Massimiliano Allegri, it was decided that he had to play there more regularly. His defensive game did improve but he was most impressive covering the right flank, dribbling past opponents, and providing an abundance of crosses. Cuadrado possessed incredible energy for a 32-year-old and he was still able to advance high up the ground despite starting from the back.

It came as a surprise that the English defender would leave his homeland for Italian football at the age of 29 but that was what the Manchester United-owned defender did and moving to Rome has perhaps been the greatest decision of his career. New Roma coach Paulo Fonseca often had issues finding his best backline but Smalling was a mainstay in the Giallorossi defence and he played 30 times throughout the 2019/20 season. His ability to read the ball and deal with aerial threats was excellent and he was capable of initiating attacks from the back.

Arguably the Achilles’ heel of the Aquile squad is the defence and it is remarkable how the veteran centre-back is able to carry that back line. The 32-year-old has impressed with his awareness, leadership, organisational skills, and ability to make the right challenges at the right time, and he also plays with great confidence in what he does. In addition to his defensive duties, Acerbi has improved on his ball control, and he can make the odd foray forward, playing a part in the build-up play for Lazio.

In his first two seasons with La Dea, the German left-back was predominantly a back-up to Belgian wing-back Timothy Castagne, but Gosens produced something out of the ordinary in the 2019/20 season for Atalanta. He capitalised on Castagne’s early injury problems and made the left wing-back position his own for the Orobici, scoring nine goals and providing eight assists in 34 Serie A matches. Gosens impressed with his stamina and combination play with his teammates in addition to his goal involvement. For a player who does not operate as a natural forward, his ability to get into those positions to supply as well as score goals was incredible.

Many people expected the Gialloblu to drop back down to Serie B after they earned their Serie A status by qualifying through the playoffs but the Veronese side surprisingly finished ninth at the end of the 2019/20 season. Coach Ivan Juric did a fantastic job organising the team and one of the keys in his side was Moroccan international Sofyan Amrabat. Due to his appearance and style of play, it easy to mistake him for his older brother Nordin, who played in a similar role for Morocco at the 2018 World Cup, but the 23-year-old is becoming a fine player in his own right and has earned a transfer to Fiorentina. Amrabat, alongside the Portuguese veteran Miguel Veloso, was able to dictate the play with consummate ease, cover plenty of ground, and also showed the ability to get into the right positions.

In previous campaigns for the Aquile, Luis Alberto would often play behind one or two of the strikers, but this season Lazio coach Simone Inzaghi placed him with the midfield quintet and the Spaniard became more influential in the construction of attacks. His technique and grace on the ball were evident but he also demonstrated his vision by picking out teammates from long distances. Luis Alberto provided 15 assists, one better than his previous league high in 2017/18, and he also found the back of the net on six occasions.

The diminutive Argentine is an example of a player that gets better with age like a fine wine. Before Gian Piero Gasperini became coach of La Dea, “Papu” was a winger but he was converted into a support striker under the former Genoa tactician. In 2019/20, Gomez started to play deeper than usual and would happily control the play from any part of the pitch. Despite his forays dropping back, this did not impact on his involvement in Atalanta’s goals and he scored seven times as well as providing the most assists in Serie A for the season with 16.

There were doubts on whether the Belgian centre-forward could adapt to the tactical and technical nature of Italian football after he endured scathing criticism at English giants Manchester United. Despite a prolific scoring record for West Bromwich Albion, Everton, and Belgium, he was criticised for squandering easy scoring chances with the Mancunian club and possessing a heavy touch on the ball. New Inter coach Antonio Conte was able to utilise his strengths, and Lukaku eventually scored 23 goals in 36 Serie A matches, also striking up a fine partnership with Argentinian striker Lautaro Martinez.

If the Biancocelesti had a hope of winning their third scudetto, their hopes rested on this man. Unfortunately, Lazio were not able to break Juve’s domestic dominance but their star striker had his best season ever, scoring 36 times and equalling the seasonal record set by Napoli forward Gonzalo Higuain in 2015/16. Detractors will point out that 14 of his goals came from the penalty spot whereas “El Pipita” only scored three but Immobile should be given credit for remaining calm in those situations as well as possessing the finishing touch in open play. He also provided eight assists and had an involvement in 55 percent of Lazio’s goals in the league.

The evergreen Portuguese forward demonstrated that he can still be a prolific scorer at 35 years of age and his 31 goals in 33 matches were a testament to that. His scoring feats in Serie A also meant that he became the first player to score 50 career goals in the Italian league, English Premier League, and Spanish Primera Division. Although he scored a hat-trick in a 4-0 victory against Cagliari in Round 18, it was his goal against Sampdoria on the previous matchday that will live long in memory. Ronaldo scored the winner in a 2-1 victory for Juventus, leaping as high as 2.57 metres to outjump opponent Nicola Murru and head the ball past Emil Audero in the Blucerchiati goal.