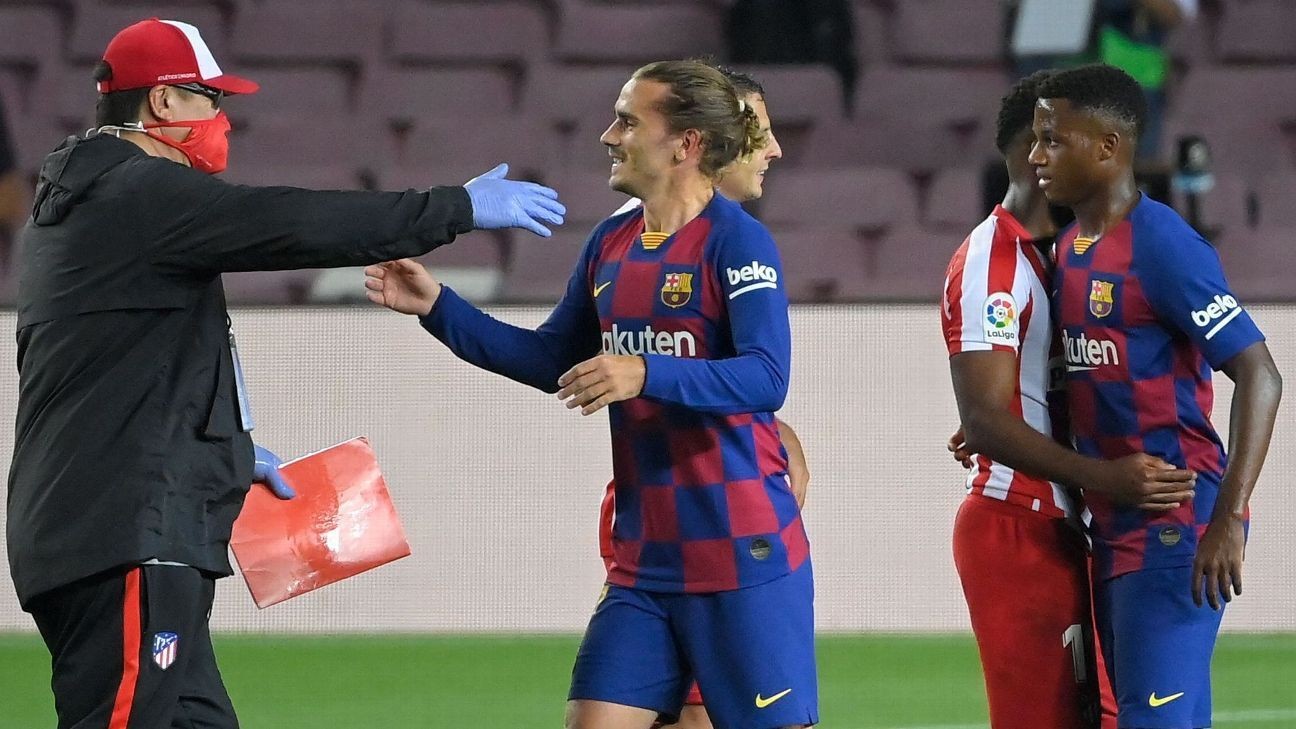 Barcelona coach Quique Setien said bringing Antoine Griezmann on earlier against Atletico Madrid risked "destabilising" the team after leaving the Frenchman on the bench for the third time in four games.

Griezmann came on in second-half stoppage time against his former side as Barca were held to a 2-2 draw which further damaged their flagging title hopes. If Real Madrid beat Getafe on Thursday, they will move four points clear with just five games to play.

Setien opted for a midfield four against Atletico and when he did eventually bring on another attacker, in the 85th minute, he opted for Ansu Fati. Griezmann, a €120 million signing from Atletico last summer, finally came on with just three minutes of additional time remaining.

"The problem is not everyone can play," Setien told Movistar when asked about the World Cup winner's absence. "We have to make decisions. Maybe it wasn't logical to bring him on [that late], but it was worse to not do so.

"A player like him can always do something. We didn't bring him on before because the team was doing well, Riqui [Puig] was doing well, we always try to have [Luis] Suarez and [Lionel] Messi on the pitch. It is difficult to find a place [for Griezmann] without destabilising the team."

Griezmann, 29, has been ever-present in his first season at Camp Nou, scoring 14 goals, but he's fallen out of favour in recent weeks.

He started on the bench against Sevilla, Celta Vigo and now Atletico -- three games which Barca drew -- as the Blaugrana have given up a two-point lead over Madrid at the top of the table.

"I don't agree with that I have no confidence in him," Setien added in a news conference. "He's an important player but I understand it's tough for him to come on with so little time left.

"I will speak with him [on Wednesday]. I won't say sorry because [it's about] decisions, but I understand he may feel bad and I feel bad for him because he's a great person and a great professional."

Barca had twice led Atletico in a game dominated by refereeing decisions. Diego Costa's own goal had opened the scoring early on, before three penalties were awarded by referee Alejandro Hernandez Hernandez.

The FC guys question whether Barca should've been awarded a penalty, which was converted by Lionel Messi.

Diego Costa missed the first but it was re-taken, and scored by Saul Niguez, after Marc-Andre ter Stegen was ruled to have stepped off his line too early. Messi converted his 700th career goal from the spot to restore Barca's lead before another Saul penalty earned a point for the visitors.

The result further increased the pressure on Setien. The coach only replaced Ernesto Valverde in January but sources told ESPN this week, after the draw at Celta Vigo, that the players and the board of directors were losing confidence in him already.

"I feel supported by the dressing room," he disputed when asked if the players still backed him.

Setien did confirm that he met with president Josep Maria Bartomeu and other board members ahead of the Atletico game, although he wouldn't explain the purpose of the meeting.

"I won't talk about the meeting with board or reveal what was said," he added.

Barca next play on Sunday, away at Villarreal. Before then, Madrid play Getafe and Athletic Bilbao, meaning Setien's side could be seven points off the pace the next time they take to the pitch.