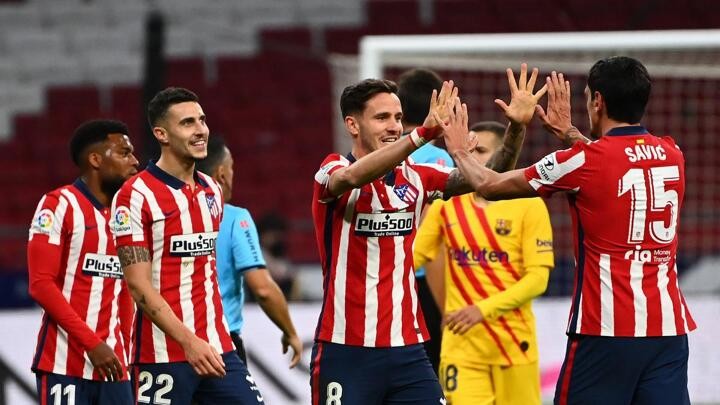 Diego Simeone claimed his first LaLiga win in 18 attempts over Barcelona on Saturday, but played down its significance in the title race.

Atlético Madrid coach Diego Simeone could not hide the enthusiasm brought on by Saturday's 1-0 win over Barcelona, though he dismissed the idea that he can see similarities with his 2013-14 title-winning team.

Los Colchoneros produced a solid display at the Wanda Metropolitano to defeat Ronald Koeman's misfiring Barça and go up to second in LaLiga, only behind Real Sociedad – who have played a game more – by virtue of scoring two goals fewer.

That victory extended Atletico's unbeaten run to 24 games in LaLiga and opened up a nine-point gap between themselves and Barca.

With defending champions Real Madrid also failing to inspire much confidence, having rarely impressed this season and been held by Villarreal earlier on Saturday, Atlético look like many people's favourite for the title.

Atletico have not won it since 2013-14, their first for 18 years at the time, but Simeone is keeping his feet on the ground.

When asked if he saw similarities with his previous title-winning team, Simeone told reporters: "No, I don't see them."

But Atletico's improvement from 2019-20 is not lost on the Argentinian, who added: "The most important things we value about the growth of footballers from last season to this one is being seen.

"We are working better on the pitch, we are being more complicit to share what the team needs and we see it.

"We need everyone. Felipe, who played much more continuously last season; Renan Lodi, who will surely be important; [Geoffrey] Kondogbia enters little by little; Saúl [Ñiguez] is finding his best form; [Ángel] Correa is showing extraordinary growth, not to mention João Félix or [Diego] Costa's enthusiasm when he came on.

"The group generates enthusiasm for me, because I see them wanting to look for important things, game by game."

The win saw Atletico end a run of 20 consecutive LaLiga matches without a victory over Barcelona, while Simeone had not beaten them in 17 previous league meetings.

But, despite the momentousness of such a victory, Simeone remained reserved and dismissed its importance.

"Today we won, that does not change the plan of what is sought. I'm very happy with the team's effort."