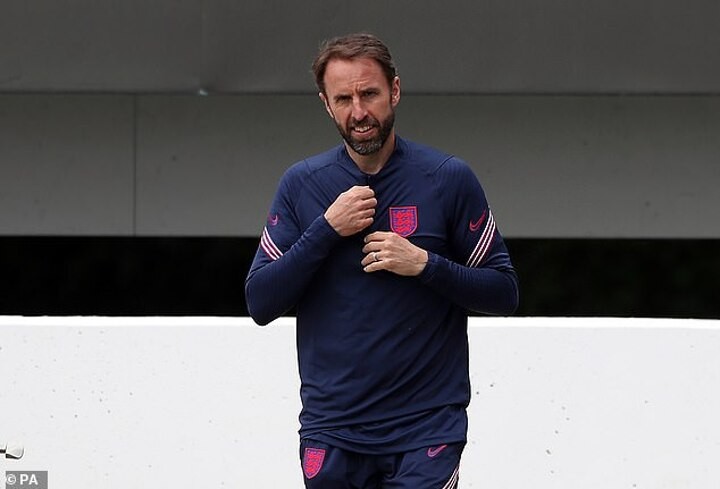 Southgate was giving serious consideration to rotating his full backs for the Euro 2020 showdown at Wembley, with Reece James ready to replace Kyle Walker at right back and Luke Shaw is set to pip Ben Chilwell in the race to replace Kieran Trippier on the opposite flank.

The England boss is also set to keep faith with Tyrone Mings in the heart of his defence despite first-choice centre back Harry Maguire declaring himself fit following an ankle ligament injury that has kept him out for six weeks.

Victory against the Scots will be enough for England to qualify for the knockout stages, raising hopes that the national team are on course to win their first major tournament since 1966.

‘Tournaments define England managers, there is no doubt about that,’ said Southgate.

‘If you look at our history, most of our win records are reasonably similar but the tournament performances define you.

And the England boss has urged his players to use the frightening episode that nearly cost Christian Eriksen his life after he suffered cardiac arrest as inspiration.

‘When we saw what happened with Christian Eriksen the other day, it was just another reminder that you have got to go for things in life and give them the best possible shot,’ said Southgate.

‘At least when you’re finished, you don’t have regrets about things you did not have a go at or performances that were inhibited. We have got to go for it.’

Southgate has also revealed that he would not be England manager today if he hadn’t led the team to victory over Scotland in November 2016.

The 50-year-old was in caretaker charge when England defeated the Scots 3-0, thanks to goals from Daniel Sturridge, Adam Lallana and Gary Cahill.

‘If we had not beaten Scotland you would not be speaking to me here,’ revealed Southgate.

‘On a personal level, by the time we got there I felt it was a job I wanted even though I was never going to say that publicly.

‘But I knew having worked with the players and having had a closer insight into the workings of the job it was something I wanted to go for in my life.

‘I had kind of regretted not having had a go at it earlier and would never have known what might have been possible. That is not a good position to be in, in your life.’

Meanwhile, Maguire is set to start the game on the bench as he approaches full fitness.

Southgate added: ‘The decision we’ve got to make is whether he’s ready to start but we’ve been really pleased with his progress.

‘He’s trained with the team for four or five days now and had no reaction.’