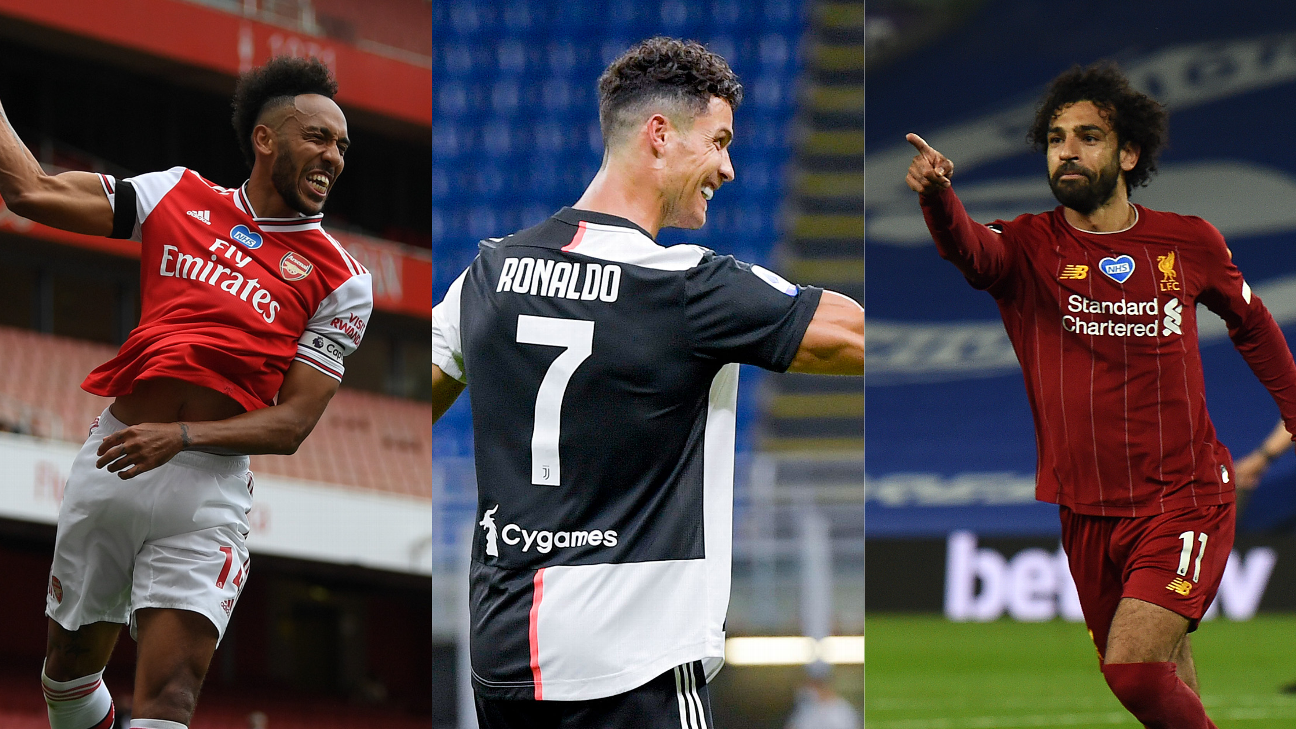 More exciting late-night football this midweek, more great numbers for us. Here are the best ones from the latest round of action.

The top four race remains as tight as ever with Leicester City dropping in a controversial 1-1 draw at Arsenal and Chelsea beating Crystal Palace 3-2. Manchester City bounced back from defeat on the south coast by dismantling Newcastle United 5-0, while champions Liverpool continued their march toward a record points total with a 3-1 win at Brighton. Manchester United play Aston Villa later tonight.

This was Manchester City's fifth PL win by 5+ goals this season - that is the most in Europe's top five leagues this season, tied with Bayern Munich and Atalanta.

Will Messi leave Barcelona? If so, would he leave for Argentina, MLS or a team with Ronaldo?Ronaldo vs. Ibrahimovic: Milan striker wins what could be last battle of two greatsCalhanoglu embracing role of veteran for a young AC Milan squad

Manchester City are the first PL side to have five different players (Sergio Aguero, Raheem Sterling, Kevin de Bruyne, Gabriel Jesus, Riyad Mahrez) score at least 10 league goals in a single season. They are the first to reach this mark in the English top-flight since Everton in 1984-85.

Liverpool have won 30 of their 34 Premier League games this season (D22 L2); this is the fastest any side has ever reached 30 wins in a season in the history of the English top flight.

Both Aubameyang and Ronaldo scored a goal each in the latest round of games, while Salah got a brace in Liverpool's win. Getty ImagesLa Liga

10-man Barcelona scraped through past 10-man Espanyol to stay within a point of league leaders Real Madrid (who have a game in hand, Friday late night v Alaves).

Espanyol is the first team to be relegated this La Liga season. They last went down since 1993-94. In fact, Espanyol has played 85 seasons in the Spanish First Division, with only Real Madrid, Barcelona and Athletic Bilbao (89) having more in the history of La Liga.

Atletico Madrid drew Celta Vigo 1-1 at the Balaidos. This is their 15th draw of the season, their most in a single top-flight campaign in the club's history. Peak Simeone.

At 17 years and 251 days old, Ansu Fati is the youngest player to be sent off in the last 10 seasons in Europe's top 5 leagues.

In their last twi games, Barcelona have extended league unbeaten streaks against both Villarreal and Espanyol to 22; that's tied for their longest unbeaten streak against any league opponent in the club's history. They last lost to Villarreal/Espanyol over a decade ago.

Luis Suarez is now the third highest goal scorer for Barcelona in La Liga history with 195, moving past Laszlo Kubala (194). Only César Rodríguez (232) and Lionel Messi (630) have scored more times for the club.

Yes, Messi has more goals than the three behind him combined.

Photo by Xavi B. / AFP7 / Europa Press Sports via Getty ImagesSerie A

AC Milan stunned Juventus, coming from 0-2 down to beat the league leaders 4-2. They are now within two points of sixth placed Napoli. Lazio's loss earlier to Lecce, though, meant that Juve's 7-point cushion at the top remains.

Lecce are the only side so far to have won or drawn against Juventus, Lazio and Inter in Serie A current season. They are 17th in the table, a point off Genoa in 18th!

AC Milan have scored 4+ goals in a single Serie A game vs Juventus for the first time since March 1989 (won that game 4-0).

Atalanta are one of only three sides to have won all the games played in the top-5 European Leagues after the restart - along with Bayern Munich (9/9) and Real Madrid (7/7).

Luis Muriel is only the second player to score in double figures in a single campaign, as a substitute, in the top-5 European Leagues in the 21st century -- along with Paco Alcacer in 2018/19 with Borussia Dortmund.

A random, but fascinating stat.

Emre Belozoglu is the first player to have scored in four different decades in the Turkish Süper Lig history. The 39-year-old first scored for Galatasaray in 1997-98 (his second season). The former Inter Milan and Newcastle United midfielder is now at Fenerbahce, in his 23rd season as a professional.

Werder Bremen has avoided relegation with a 2-2 draw at Heidenheim -- Bremen have only been relegated once to the 2. Bundesliga in club history (1979-80). Bundesliga teams had won 16 of the last 22 promotion/relegation playoffs since 1982

Cristiano Ronaldo scored, while Lionel Messi had a quiet game this mid-week.

Ronaldo has scored in nine straight away games in Serie A. That is tied for the longest streak within a season in Serie A history, he has matched himself and Giuseppe Signori (1992-93).

Ronaldo has scored 18 goals in 2020 in all competitions - leaving him three shy of tying Robert Lewandowski for the most among all players.