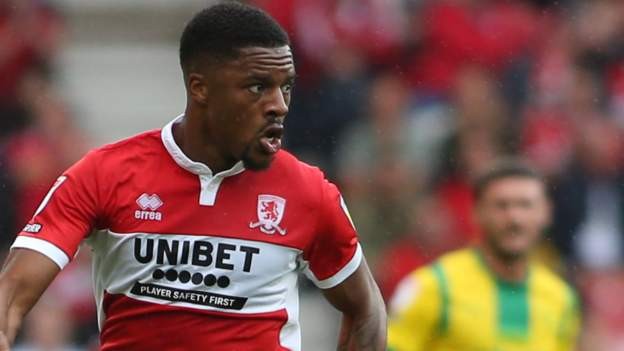 Middlesbrough boss Chris Wilder has been impressed by striker Chuba Akpom's output, after a second-half introduction in Saturday's loss to QPR.

The 26-year-old was brought back into the first-team picture by Wilder this summer after a loan spell in Greece with PAOK last term.

While Wilder would still like to add extra depth up front, Akpom does give Boro a different forward option.

"He can't do any more than what he is doing," Wilder told BBC Radio Tees.

"He gave us some strength and some physicality, he can't start because of conditioning and issues, but when he played second half we saw what he gives us at the top end of the pitch.

"We're in a situation at the moment, we're conditioning Marcus [Forss], Duncan [Watmore] is in the position he's in and we don't have physicality at the top of the pitch, which we need and are trying to sort out.

"But he got hold of it, he linked it, he allowed us to get up with him and then we built and dominated, the majority of what I was looking for in the second half was there."

Akpom, who started his career at Arsenal, was brought to the Riverside in September 2020 by former boss Neil Warnock, but only scored five goals in 39 games before this season.

After it was expected he would depart this summer, a lack of interest meant he was kept in the squad and he has played in both games so far under Wilder, who got his first chance to work with the former Nottingham Forest and Hull frontman in preseason.

Boro's striker options have been further affected by an injury to Josh Coburn, who will be out for six-to-eight weeks.

"It's really disappointing for him," Wilder added.

"He jarred his knee last week against West Brom. It's disappointing for the young guy but hopefully he doesn't waste his time that he's got now, and makes sure he uses that time to be bigger and stronger and more powerful for when he comes back."