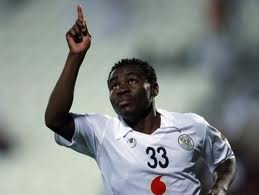 The 22-year who is currently on loan at Qatari side Al-Ahly Doha has not played for the Black Stars since the 2012 nationâ€™s cup qualifier against Congo in Kumasi on June 3 last year.

He missed the qualifiers for the 2010 World Cup and the run-in to the 2012 African Cup of Nations but the ex-Under-17 star has set his eyes on grabbing an international lifeline under the former Black Stars skipper.

â€œWho knows, possibly the new coach will want to give me another chance which I hope to grab with both hands to state my case that Iâ€™m back to my former form,â€ Agyeman said

â€œThat is the opportunity I am looking for to make a return to the senior national team.

â€œHopefully my prayers will be answered in the coming weeks.

â€œIt was never easy for sitting out in the stands for that lengthy period. But thank God Iâ€™m finally back and the big dream now is to return to the Black Stars,â€

Opoku was a member of the Black Stars squad that won silver at the 2010 African Cup of Nations in Angola under Milovan Rajevac.

He was also a member of the Black Satellites squad that won Africaâ€™s first ever gold medal at the World Under-20 Championship in Egypt 2009.