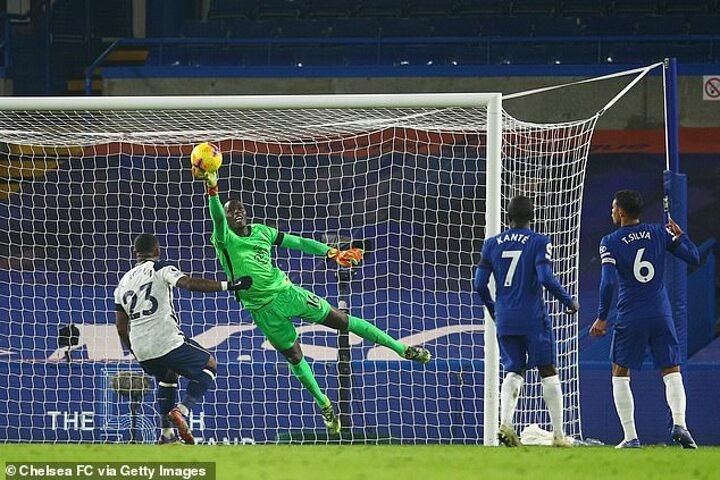 Another weekend of Premier League football delivered another swathe of talking points after a fascinating round of fixtures.

Perhaps the biggest shock came at Stamford Bridge, where free-scoring Chelsea and an in-form Tottenham failed to muster a goal between them. However, there were positives to find for both teams in terms of their defence.

Elsewhere on Sunday, Manchester United produced a stunning comeback at St Mary's to register yet another away-day success. And Southampton weren't the first side to experience a United turnaround this season, either.

For Arsenal, the main talking point is there inability to turn things around, even with Mikel Arteta in charge.

On Saturday, the behaviour of Jurgen Klopp suggests he is a man on the edge at Liverpool, and it's clear to see why after his side's disastrous draw at the Amex. There was better news for Pep Guardiola's Manchester City who finally found their way to goal against Burnley - and in some style.

There were important wins for West Brom, Leeds and Newcastle, too - as Sportsmail takes a look at the biggest takeaways from Friday, Saturday and Sunday.

Billed as the most mouthwatering clash of the weekend, it was a bit of a damp squib at Stamford Bridge as Chelsea and Tottenham failed to muster a goal between them.

It was a bit of a shock going off both team's strong start in front of goal this season. No one had scored more than the 22 netted by Frank Lampard's men in the Premier League, while Jose Mourinho's men hadn't been shut out since their opening weekend defeat by Everton.

In the end it was not a particularly busy afternoon for either keeper, but when called upon, Edouard Mendy was on hand to tip away Serge Aurier's fierce drive.

For the Blues to be able to call on a reliable figure in goal is a breath of fresh air for Lampard after the uncertainty caused by Kepa Arrizabalaga for the past few seasons.

In keeping out Spurs, Mendy registered his fifth clean-sheet of the season, more than any other top-flight goalkeeper so far this season in England.

The point kept Chelsea in third place, two points behind Spurs and holders Liverpool on 21 points.

More performances like this at the back, and they will be in the conversation come the end of the season, too.

Spurs on a role, on the road

Mendy was not the only shot-stopper on song at Stamford Bridge on Sunday afternoon.

Hugo Lloris had to be at his best to deny Mason Mount in the second half, and in doing so kept Tottenham's unbeaten start to the season on the road intact.

It was a point that also kept Jose Mourinho's men top of the tree going into December, though the Portuguese boss was at pains to downplay his side's title credentials.

Only, Mourinho is not fooling anyone.

He used a similar analogy while Chelsea boss in 2014, calling his side a 'little horse' before going on to lift the trophy in 2015.

Another thing pointing in his side's favour? Spurs' draw on Sunday saw them register their best start away from home in a top-flight season since 1960 after winning four and drawing one.

By the end of that season, Spurs were celebrating the first division title. Sixty years on, supporters will be beginning to wonder if this is history repeating.

Klopp on the verge

There was very little that went Jurgen Klopp's way on Saturday lunchtime.

Already aggrieved at the quick turnover period induced by broadcasting rights holders, The German saw his side suffer the wrath of VAR as Brighton registered a late, late point.

Add into that two disallowed goals, another penalty that was missed, and yet another muscular injury to one of his players - this time James Milner - and the Reds boss cut a thoroughly miserable figure at full-time.

It culminated in an extraordinary bust up with BT Sport interviewer Des Kelly on the Amex Stadium touchline as Klopp pointed the finger at broadcasters for causing injuries to his players by enforcing quick turnarounds from European action to domestic games.

Conceding a late equaliser will not have helped his mood, but you got the feeling that even victory would not have saved Kelly from the outburst.

It was the actions of a man who feels his warnings are falling on deaf ears, with his campaign to reinstate five substitutes this season so far proving fruitless.

Milner came out on Instagram after the game to bemoan the late penalty decision and question whether anyone else, like him, was falling out of love with the game.

You can only get the impression that his boss is right there alongside him, and that could be real cause for concern in the corridors of Anfield.

Take it away, Ole

Rain or shine, there is no middle ground for Ole Gunnar Solskjaer at the moment.

After questions were once again asked of Manchester United after struggling past West Brom last weekend, there were plenty of question marks come half-time at St Mary's on Sunday.

Trailing 2-0, it looked for all the world as though a defeat would once again undo the good work done during midweek's morale-boosting victory over Istanbul Basaksehir.

One incredible turnaround later, though, and United are once again basking in the sunshine of a season that is looking up.

Their second-half showing saw United record eight Premier League away wins on the bounce for the first time in their history - a real feather in the cap of Solskjaer.

What is even more eye-catching is the manner of those victories of late.

Each of the last four successes on the road have seen United battle from behind to take all three points. It is a sure sign that the players are willing to fight for their manager.

Indeed, United are now five points off top, with a game in hand, too. The good news? It's away, at Burnley.

United have a real golden oldie

For what appeared to all intents and purposes a desperate deadline day purchase, Edinson Cavani is proving anything but for Manchester United.

It is not the first time United have called upon an aging icon to boost their attack, and the Urugayan appears to be heading in the same direction of Henrik Larsson and Zlatan Ibrahimovic in providing a genuine threat.

Coming off the bench, the 33-year-old was the undoubted star of the show, scoring twice and setting up Bruno Fernandes for the other as he single-handedly turned the game on its head.

Praised on match of the day by Alan Shearer for providing United with a Plan B, and some much-needed movement up top, no United substitute has been involved in more goals in a single match since his current boss came off the bench to score four against Nottingham Forest in 1999.

After his south coast showing, he will be keen to make sure his next impact does not have to come off of the bench.

For years under Arsene Wenger and forever since, the same accusation has been levelled at Arsenal.

There is no backbone, no fight, and no one to take the game by the scruff of the neck when the going gets tough.

We have been told that there are signs this is changing under Mikel Arteta, but the reality couldn't be much different.

After cementing their worst start to a Premier League season ever after losing 2-1 at home to Wolves, it has become apparent that the Gunners are once again struggling to get back in to any match when falling behind.

For the seventh time under Arteta, they have failed to win after trailing at half time - in this case 2-1 after Pedro Neto and Daniel Podence struck for the visitors, with Gabriel's equaliser sandwiched between the two strikes.

When the likes of Ole Gunnar Solskjaer can whip his United team into a response, it leaves many scratching their heads as to why a manager as lauded as the Spaniard cannot.

It may have been perhaps the most predictable result of the weekend, but that doesn't make Pep Guardiola's Nostradamus-esque prediction before Manchester City's rout of Burnley any less impressive.

'One day it will break and we'll score more goals, we'll put on the table what we deserve,' Guardiola said before the fixture.

He must have had an inkling, with City facing an opponent they had beaten 5-0 on three consecutive occasions at the Eithad before Saturday.

The fact they made it a fourth - only the second time this has happened in the history of English football - should come as a warning to those soon to find themselves in their path. Best of luck, Fulham.

Leeds and the long rangers

Let's be frank, there should have been a bucket-load of goals at Goodison Park on Saturday night. As it was, a mixture of wasteful finishing and decent stops meant we had just the one to enjoy.

But it was worth the wait.

Raphinha's late strike beat Jordan Pickford from outside the area and propelled Leeds back up the league, back into the comfort of 12th place.

It was the third time this season Marcelo Bielsa's men had struck from outside the area - more than any other side in the top flight during this campaign.

It is not something they will want to continue to rely on, but it is a handy tool to hold in your arsenal. And the Brazilian's strike was very easy on the eye, too.

Joelinton shows his worth

Joelinton has been much maligned for his contribution at St James's Park since arriving for a club record £40m in the summer of 2019.

After an encouraging start, reliant entirely on his winning strike against Spurs in August that year, it became very clear that the No 9 was weighing heavy on the Brazilian's shoulders.

It has become clear that he is not the centre forward Newcastle thought they were buying to lead their line, but in the absence of other options, they had been forced to carry on.

Now with Callum Wilson's arrival, Joelinton can be pushed out into a more favoured wide position, and stepping out of the limelight, it appears he may just be finding his feet.

His goal and assist on Friday evening against Crystal Palace secured all three points for Steve Bruce, and while he has a long way to go, his performance suggested all £40m may not go to waste just yet.

In Saturday evening's basement battle, it was West Brom that came out with the all-important three points.

There was plenty to be optimistic about for Slaven Bilic and his men after they climbed out of the relegation zone.

One of the most promising signs for the Baggies, besides Chelsea loanee Conor Gallagher's strike, was the performance of Matheus Pereira.

A key part of their promotion push last campaign, the Brazilian created seven chances at The Hawthorns, more than any other player in a single Premier League match this season.

Keeping his creative juices flowing will be key to West Brom's survival chances as the season goes on.