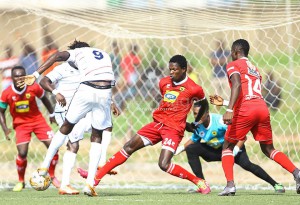 Premier league football returned with no change at the top and bottom halves of the log. Pack chasers dropped points as teams in the top spots dropped points to cancel out each other and leave the league table virtually unchanged.

The weekend action kicked off at the Tema Sports stadium on saturday where Asante Kotoko were guest to struggling Inter Allies.

The latter restored parity after falling behind early in the game to pick a point. Techiman City FC saw off West Africa Football Academy at home in a 1-0 win.

Bechem United beat regional rivals Berekum Chelsea 2-o to lift themselves out of the drop zone.

Comeback kings of the season Medeama SC yet again came from behind to beat Dreams FC 2-1 in a crunch game at the Tarkwa park. Ebusua Dwarfs took full advantage of playing at home to secure a 2-0 victory over Hasaacas.

League leaders All Stars and Hearts of Oak were both held to a barren draw at home by Ashanti Gold FC and Aduana Stars respectively.

New Edubiase United could only manage a point in a game where they needed maximum points against Liberty Professionals at home.

This result keeps them rooted at the bottom for yet another week.

The 2015/2016 Ghana premier league started on a low scoring note with most clubs opting to go the conservative way.

The floodgates however opened from the midway point to latter parts of the first round. It was goals galore with Aduana Stars emerging as the surprise top scoring club both at home and on their travel.

Individuals in the shape of Yahaya Mohammed, Latif Blessing, Saddick Adams seized the initiative and banged in goals at will. Much as teams and defences resorted to sitting back these individuals always found a route in behind them to subject fans to avalanche of goals.

Fast forward to the second round and the story has been inversely proportional to the testament in the first round. Eventhough a few of the goals have gone in, it’s been far and few as compared to the first round.

Top marksmen Yahaya Mohammed and Cosmos Dauda over the weekend gave us a reason to believe the goals are subsiding. They both recorded a no effort of target when their teams clashed in the weekend’s topliner.

Eventhough a player like Latif Blessing has kept his head up fellow predators in the final third of the field have shown various degrees of erraticness in the second half of the season.

Have teams and their defences found an antidote to the predatory instincts of our league’s top marksmen or it’s just the perennial recoil by teams into their shells in anticipation to cumbersome nature of the season’s home stretch?