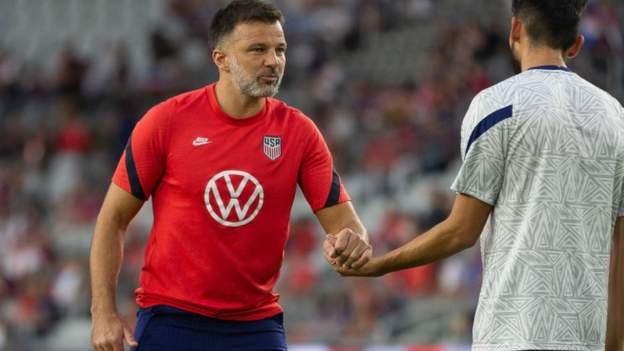 The sound of prison doors clanging shut has given Anthony Hudson a strong sense of perspective.

Hudson, the USA assistant coach, is reflective about knowing there is another world, far removed from the fit, healthy and, in some cases, mega-rich footballers he is working with at the World Cup in Qatar.

It means he appreciates all the more his role at the tournament - where he is attempting to help the States beat England at the Al-Bayt Stadium on Friday.

For Hudson, victory would be sweet against the country where he grew up and for which his dad Alan won two caps.

But he knows all about the other side of life too, having been a prison visitor.

Hudson began going into prisons, having decided to "give something back" during his personal journey away from the destructive path an addiction to alcohol was leading him down.

"Every single time you walk in there and hear the steel doors and recognise the strictness and formalities of the doors slamming and the register being taken, it is a reminder of what a very tough environment you are in," he said. "It is scary.

"There was one specific incident at a medium security prison just outside Maryland, where it got a little bit sketchy. There was a big guy in there who was making fun of my accent the whole time but not in a good way.

"I was chatting to this young kid next to me and it nearly kicked off. The wardens jumped on the big guy and it was chaos. As it was happening, this kid, he was only small and must have been 20 or 21, he had fear in his eyes. He was like 'please come back'.

"To walk out in that situation was really tough. But at the same time it is also meaningful because you understand the difference it might make."

A former youth player at West Ham and Luton, the 41-year-old was initially asked if he would be willing to go on prison visits 15 years ago, when he was coming to the end of his playing career with the semi-professional Wilmington Hammerheads club in North Carolina.

That advanced to his present project as founder and chairman of the Forgotten Dogs Foundation, which also links with his prison visits.

"I am a huge dog lover and wanted to set up a shelter but because of my job I had not been able to," he said. "This is in a special part of the wing in the prison.

"People who love dogs can go in and work with the bigger, more aggressive dogs that no-one wants to rescue and are going to get euthanised. There is a full-time trainer who trains the inmates to teach the dogs. The dogs stay with the inmates 24/7. The inmates learn a new trade.

"I went into this guy's cell, which was a grey, concrete wall, with a high ceiling and a small window at the top you couldn't see through and a steel bed. In the corner there was a crate for the dog. I remember walking in and he was sitting there with the dog in his lap.

"The guy said it gave him purpose because he was saving the dog's life. It was amazing."

'I called my family and they were screaming'

Such sobering and uplifting experiences will be pushed firmly to the back of Hudson's mind at the World Cup.

The USA are seeking a first win after opening their Group B campaign by drawing 1-1 with Wales on Monday; now, Hudson faces a country with which he has a strong connection.

Born in Seattle in 1981, he grew up in the north-west of England after his dad returned to Stoke for a second spell in 1984 as he brought his own playing career to a close.

An element of mixed emotions would be understandable. Yet Hudson says his position is not as clear cut as that. His dad spent four years playing in the USA after joining Seattle Sounders in 1979 and from there he got his love of life in the States.

"My old man truly loves America. He loved the way his life was here. He loved the NASL. He loved the lifestyle. He told me stories about the game out here. I grew up with my old man saying 'one day you have to go to America'," said Hudson.

"When the draw came out, it was amazing. I called my family and they were screaming. It was a proud moment and an exciting moment. The dream is to play or coach at the World Cup. To be doing it and to play against one of the top teams and one I have a connection with is really special."

The feelings are only enhanced by Hudson's "sore experience" from four years ago, when he was in charge of the New Zealand side beaten in the intercontinental play-offs by Peru.

Even at the start of the most recent qualifying campaign, he was coaching the USA Under-20s until he was brought into Gregg Berhalter's team to work with the senior squad in July 2020.

Progress to Qatar was not straightforward for the USA, as they drew their opening two games and lost to Panama in the fifth of a marathon 14-match qualification programme.

Nevertheless, having made it to the finals four years after missing out on Russia 2018 completely, they are hopeful of advancing into the last 16, which gives them a chance of emulating their best performance, in Japan and South Korea in 2002, when they were beaten by Germany in the quarter-finals.

With one of the youngest squads in Qatar, including talents like Chelsea's Christian Pulisic and Winston McKennie of Juventus, the USA's future looks bright.

"America has always had some top players," he said. "This feels different because the players who are coming through are a lot more technical.

"They are with top clubs in big leagues and it is a generation with a lot of potential."