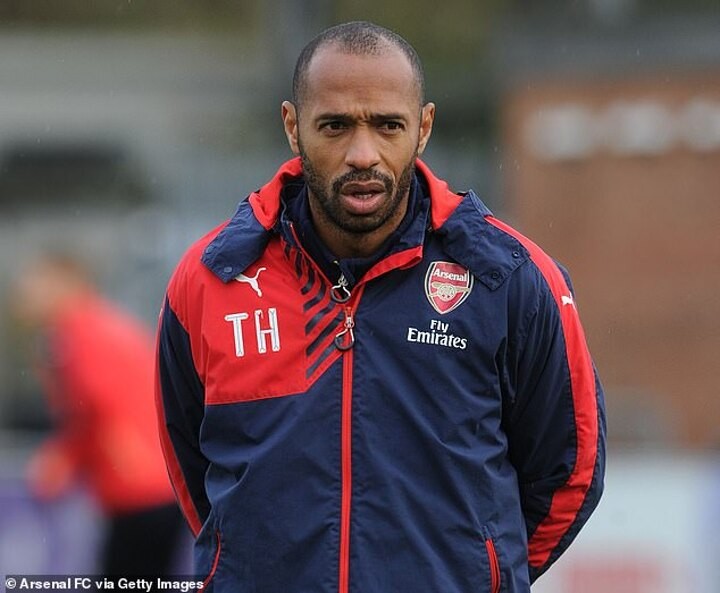 Thierry Henry admits he wants to go from being an Arsenal fan to the Gunners' next manager one day, though admits he is still learning his trade as a coach.

The Frenchman, who is Arsenal's all-time record goalscorer with 228 goals, recently left Major League Soccer club Montreal Impact as he continues his route into management after a stellar playing career.

Henry's coaching experience also includes a stint at AS Monaco and an assistant manager role with the Belgium national team but the 43-year-old claims taking his seat in the Emirates Stadium dugout is the dream role for him.

'I’m on my learning curve, I want to do well for the team I’m coaching, then time will tell. If you’re not successful, you’re not going to have those types of opportunities. I’m just concentrating on what I can control, and the rest is a massive utopia.'

The Frenchman won the treble with Pep Guardiola's Catalans in 2009 - including the Champions League trophy - and also lifted an additional LaLiga title and the Club World Cup trophy in the 2009-10 season.

Henry, who also won the World Cup with France in 1998, admitted he speaks to former coaches Wenger and Guardiola to gain some managerial advice as he continues his development in the dugout.

Wenger gave Henry his first taste of coaching when the former striker helped coach the Gunners' youth teams between February 2015 and and July 2016.

The Arsenal legend added: 'Whenever I see a coach, I always speak to them. Obviously I speak to Pep, and I speak to Arsene whenever I can reach him.

'We speak, because when I was a player and he was a coach, I was chewing his ear out. Now as a coach I want to know things. Arsene triggered my brain – I needed that at the time.

'Pep was a master of tactics. He can see so much that sometimes it might be a problem for him, because he sees a lot and he wants to change things a lot! Tactically, he’s a freak. The stuff I learned from him was incredible.'

While the former striker admires the work of current Manchester City boss Guardiola, there is only one place that Henry wants to end up due to his connection with a certain north London fanbase.

He continued: 'Arsenal is part of me and always will be – half of my heart belongs to Arsenal, and the other half to my family.

'The understanding I have with Arsenal fans is something I cannot describe – it’s something I’m always going to miss.'