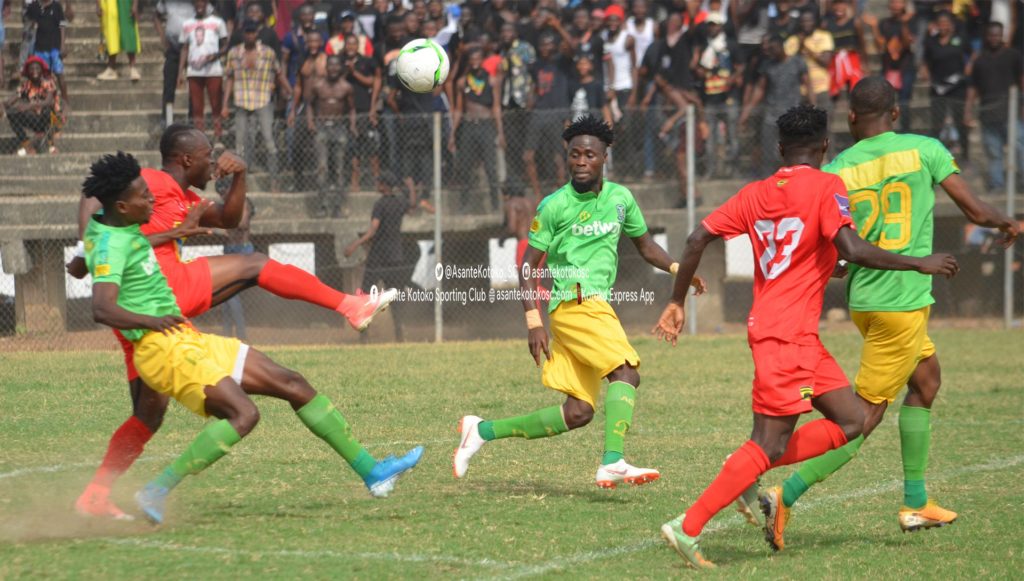 The game which has over the years been dominated by superstition is the clash between the fiercest rivals in Ghana football, Asante Kotoko and Accra Hearts of Oak.

Football is usually played with 11 men on the field especially from the blast of the referee's first whistle.

However, Ghanaian clubs, as a result of superstition, have in the past started games with ten men from either side.

Reports usually emerge that these clubs consult the oracle and they are sometimes directed to do certain weird things in order to get the upper hand spiritually.

One of those things is to start a game with ten men which is out of the ordinary in association football, despite not infringing on the laws of the game which indicate that a football match can be played with at least 7 players, implying a game can be started with a minimum of 7 players.

The latest superstition which has dominated the sporting headlines in Ghana is a bizarre decision by Aduana Stars and Asante Kotoko to start their mid-week clash with ten players each.

Both sides had been hinted by spiritualists after they went for consultations that the results won't go in their favour if they start with eleven men on the field.

They both started the game with ten men each, before Lawrence Amankwa and Jacob Nettey came on for Asante Kotoko and Hearts of Oak, respectively.

The match ended 1-1 with Emmanuel Yartey scoring the opener for the Porcupine Warriors before Joe Ansah pulled the Accra giants’ level, but Hearts of Oak subsequently won 7-6 in the resulting penalty shootout.

Wa All Stars clash against AshGold was marred by superstition

Superstition marred the beauty of the game between Wa All Stars and visiting Obuasi Ashanti Gold in their One Touch Premier League encounter at the Wa Sports Stadium.

An Ashgold player urinated on the floor leading to the dressing room and that nearly caused confusion between the team and supporters of the Wa lads who did not take kindly to the behaviour of the player.

Some supporters of the home side, however, poured water on the urine and swept it out before the game started. As if that was not enough, the two teams again decided to present 10 players each for the match to commence when referee Vivian Aggor from Accra blew the whistle for the proceedings to begin.

The proceedings in the first half of the game saw nothing spectacular until getting to the dying minutes when Wa Stars lifted their game and created a few goal scoring chances but the chances were wasted by the attackers through erratic shooting and near misses at goal.

Back from the recess, the two teams made some changes to carry the day as the game progressed. With no goals coming their way, the supporters of Wa Stars decided to cheer on the players to go in for goals but the much-needed goals were not coming as the Ashgold players played it hard to tame the home lads.

On the 58th minute, an ugly scene occurred around the Ashgold goal area during a struggle for an aerial ball between the defenders of the visitors and Kwabena Dodzi of Wa Stars when the striker was brought down.

Ashgold's goalie Fatau Dauda for no apparent reason rushed out from his post and stamped on Dodzi several times that resulted in a hold up of the game to attend to the injured player. Referee Aggor who was on the spot showed the keeper the red card but declined to award any penalty to the home team.

This act of the referee caused confusion as some supporters of the home team prevented keeper Dauda from going to the dressing room. Keeper Dauda was however taken away in an ambulance for his safety.

The game from then generated into a rough and physical one and creating ugly scenes as the home supporters had expected an incident-free and exciting match and victory for the darling club which never came their way until the final whistle.

Both Asante Kotoko and Aduana Stars started the game with ten men.

Rumours circulating in the media suggest both sides had been hinted by spiritualists after they went for consultations that the results won't go in their favour if they start with eleven men on the field, so they started with ten men each.

It was in the course of the game that they introduced the additional one man from both outfits.

The game was a tight one as the first half ended without a goal and the second half too failed to produce any goal.

However, Aduana Stars broke the deadlock with two minutes into the additional ten minutes.

Samuel Bioh emerged as the hero of the day when he gave a connection to a well-calculated pass to give his side all the three maximum points.

Aduana Stars have responded well after they were hammered 5-2 at Liberty Professionals on matchday 10- the highest goals the club have conceded in the Ghana Premier League history.

Asante Kotoko in their nine visits to Dormaa have lost 6 and drawn 3. They have never won at Dormaa.