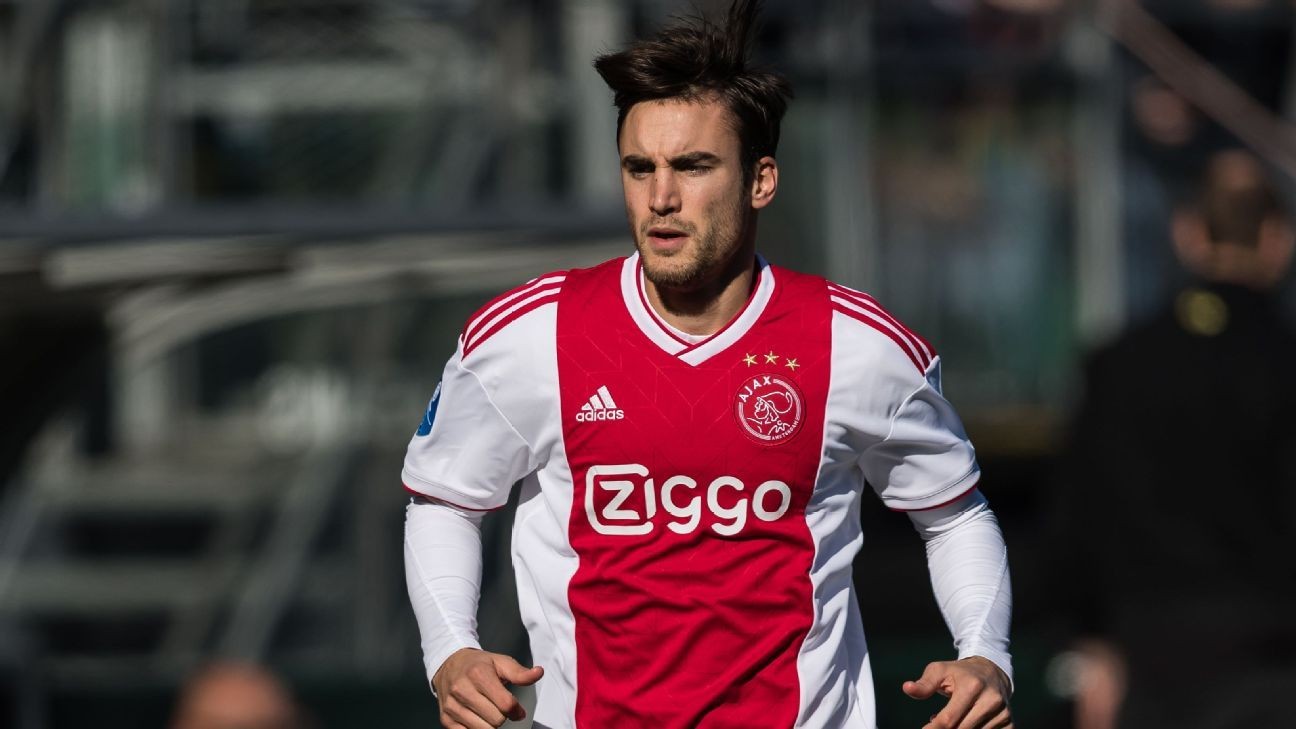 Chelsea have expressed an interest in bringing Ajax left-back Nicolas Tagliafico to West London, but Frank Lampard's side face strong competition from Spain.

Sky Sports has identified the Stamford Bridge outfit as one of three clubs who want to sign the defender, with La Liga duo Barcelona and Atletico Madrid ready to provide stiff competition.

Tagliafico, 27, has been capped 25 times by Argentina, while Chelsea have already snapped up one Ajax player this season in Hakim Ziyech.

Lampard is also reported to be monitoring Real Madrid's Sergio Reguilon following a successful loan-spell with Sevilla, having failed to strike a deal with Leicester for Ben Chilwell; although the Foxes are now believed to be willing to drop their original £80m asking price.

12.40 BST: Martin Odegaard is expected to play for Real Madrid next season, multiple sources have told ESPN's Rodrigo Faez and Alex Kirkland, after the club told Real Sociedad that they want to end the 21-year-old's loan spell early.

The move is a shock for the Basque club, who had been convinced that the Norwegian midfielder would spend a second season in San Sebastian.

Real manager Zinedine Zidane decided on the last-minute change of plans in the wake of the defeat to Manchester City on Friday. The French coach wants more options in central midfield -- and was keen on a bid for Manchester United's Paul Pogba last summer for the same reason, although the two players have different profiles.

The MLS club are keen to sign Gotze, who left Dortmund this summer when his contract expired. However, the 28-year-old World Cup winner has rejected the move, preferring to stay in Europe for now.

11.49 BST: Andrea Pirlo's hiring at Juventus could set into motion another transfer saga: Paul Pogba's move from Man United to the club. Remember that?

Pogba and Pirlo were previously teammates at Juventus before Pirlo left for NYCFC in 2015 and Pogba departed a year later for an £89.3m move to Old Trafford. And former Italy striker Luca Toni says that they could reunite.

"Knowing Andrea, he will start building from midfield," Toni told Tuttosport. "The ideal gift would be Pogba. I don't know if that's possible, but it would certainly be the best option."

11.24 BST: Manchester United will continue to pursue a deal for Borussia Dortmund winger Jadon Sancho but have sounded out Barcelona's Ousmane Dembele as a possible alternative, sources have told ESPN's James Olley.

Dortmund sporting director Michael Zorc cast doubt over the 20-year-old's long-anticipated move to Old Trafford when he said the club "plan on having Sancho in our team this season," adding that the decision on his future was "final."

Sources said that United have held informal talks over a move for Dembele, who has two years left on his contract. The 23-year-old has not played a competitive match since November and underwent surgery on his hamstring in February.

11.11 BST: Former Chelsea and Liverpool striker Daniel Sturridge has told Sky Sports that he wants to return to the Premier League.

Sturridge, 30, has scored 105 goals in 306 appearances for Manchester City, Chelsea, Bolton, Liverpool and West Brom. He served a four-month ban from the FA after being found guilty of 11 alleged breaches of its betting rules, then terminated his contract with Turkish side Trabzonspor in March.

"We have options around the world but I'm an English player and I've always loved playing in the Premier League," he said. "I believe I've got a lot to give to the Premier League and I would say that's my first choice. I do feel I have unfinished business so I would like to go back and play there.

"I'm open to playing in other leagues, it's not just the Premier League I'm going to consider, but to come back to England and give my best would be a huge option for me.

"I'm very excited, I'm hungrier than ever and I'm totally focused on the next chapter."

10.35 BST: Manchester United have not given up hope of landing Jadon Sancho but are growing frustrated by Borussia Dortmund's conduct during negotiations, sources have told ESPN's Rob Dawson.

United remain determined to sign Sancho this summer, despite comments made by Dortmund sporting director Michael Zorc on Monday claiming the deal is dead.

Schick, 24, was Leipzig's second top goal scorer in the league after Timo Werner last term, but Leipzig were not able to agree a new loan with Roma for the 2020-2021 season. Instead the Serie A club are hoping to cash in on the Czech international attacker and sell him for a fee of around €25m to raise funds amid the coronavirus pandemic.

Leipzig did not exercise their €29m purchase option for Schick, who scored 10 goals in 22 league games last term and had hoped to broker a new loan deal with another buy option. But with interest from Premier League clubs, as well as Hertha Berlin and Bayer Leverkusen, Roma are keen to sell him this summer.

09.22 BST: Villarreal are set to announce the €8m signing (plus €3m in variables) of Valencia midfielder Francis Coquelin, according to Superdeporte.

Coquelin, 29, has two years left on his contract with Valencia and has been a regular in the first team since joining Los Che in a €14m transfer from Arsenal in January 2018.

Villarreal are also in advanced talks to land Valencia veteran midfielder Dani Parejo, who was placed on the transfer list. Diario AS reports that Valencia will allow their team captain, who is tied to the club until June 2022, to leave for free in order to compensate for the high wages Villarreal will have to pay the Spain international.

Parejo, 31, has played nine seasons at the Mestalla stadium and is keen to join Villarreal in order to remain in the Valencia region. Villarreal, who appointed Unai Emery as coach last month, after dismissing Javi Calleja, finished fifth in La Liga to qualify for European football next season.

The France international is in Paris, where he will undergo his medical before signing a three-year contract with the club.

He also spoke to Didier Deschamps, the France head coach, for whom he remains a key player in the 2018 World Cup winners' squad. Matuidi will be the 13th French player in MLS this season.

Matuidi has 84 caps for France and his signing represents a huge coup for Beckham's side, who recently called for patience after a difficult start for the franchise.

Juventus wanted to keep him, but Matuidi was seeking a new challenge; he will be Inter Miami's third Designated Player, alongside Matias Pellegrini and Rodolfo Pizarro.

08.31 BST: Barcelona youngster Pedri has revealed that he was turned down by Real Madrid before agreeing a move to Camp Nou.

The 17-year-old forward signed a deal with Barca in 2019, but stayed with Las Palmas this season in Spain's second division.

"Two or three years ago I went (to Madrid) for a trial," Pedri told YouTube channel Post United. "I was there for a week, but they told me to keep working, that they didn't want to sign me."

The talented playmaker said he'd consider a loan move next season to get more playing time.

"I'd be open to it if I don't have an opportunity [at Barca]. There are really good offers from German teams. I wouldn't mind playing abroad, the important thing is to play and keep growing," he said.

08.00 BST: Liverpool have made their first signing of the transfer window by bringing in Greece defender Konstantinos Tsimikas from Olympiakos on a long-term deal, the Premier League champions announced on Monday.

The 24-year-old left back made 46 appearances for Olympiakos in all competitions last season as they won their 45th Greek Super League title.

Financial details were not given but British media said Liverpool paid £11m ($14.38m) for Tsimikas, who has played three times for Greece since making his debut in October 2018.

Tsimikas, who has had loan spells at Danish side Esjberg and Dutch outfit Willem II, has Champions League experience and is expected to provide cover for left back Andy Robertson.

Julien Laurens and Gab Marcotti discuss Olympiacos' Kostas Tsimikas who is rumoured to be joining Liverpool.

PAPER TALK (by Liam Wheeler)Newcastle join the race for Sessegnon

The Sun reports that Newcastle United have become the latest club to set their sights on Tottenham's 20-year-old starlet Ryan Sessegnon.

Newly promoted Fulham, whom Sessegnon left to join Spurs last summer, have also been linked with the winger in recent days.

Newcastle boss Steve Bruce is expected to find himself working on a tight budget -- reportedly just £30m -- ahead of the new campaign following a failed £300m takeover attempt by a Saudi-based consortium.

And Bruce is now expected to turn his attention to homegrown talent where he believes there are bargains to be had.

Sessegnon made just 12 appearances for Spurs in all competitions this season, scoring once -- a consolation goal in a 3-1 Champions League defeat to Bayern Munich.

- Juventus' transfer list could offer up a veritable Who's Who of international superstars this summer. The Mirror reports that Aaron Ramsey, Gonzalo Higuain, Sami Khedira, Daniele Rugani and Mattia De Sciglio will all be shown the door by new boss Andrea Pirlo.

- The Sun reports that Brighton boss Graham Potter is prepared to let one centre-back leave the club, but not the man on everybody's lips. Potter is standing firm over the in-demand Ben White, but he is said to be willing to let Shane Duffy leave the club following interest from West Bromwich Albion.