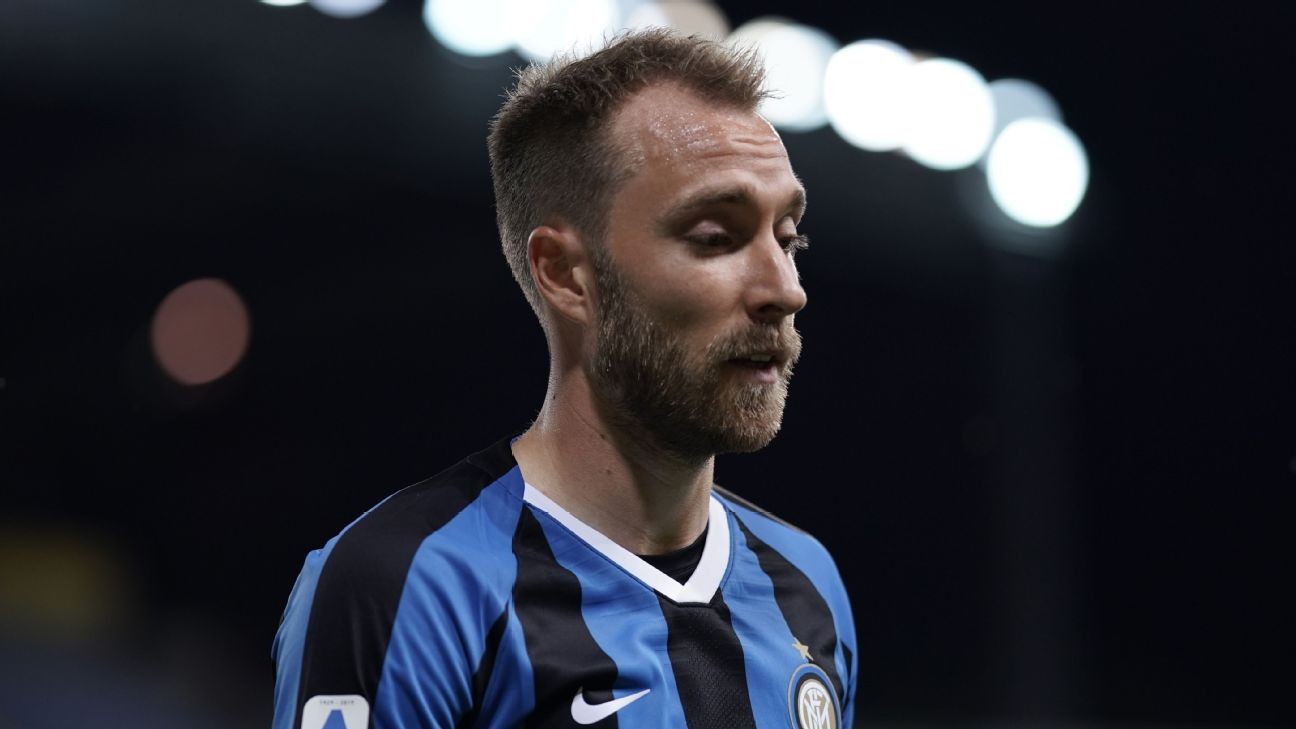 Christian Eriksen could be on his way out of Internazionale just six months after joining the club from Tottenham Hotspur.

The Mail, citing reports in Italy, suggests that the Nerazzurri are willing to listen to offers for the Denmark international after he has failed to impress under Antonio Conte at the San Siro.

The 28-year-old has struggled for form since his move in January and was even dropped to the bench for the recent 3-1 victory over Torino, with Conte himself hinting that Eriksen's reputation isn't enough for him to guarantee a starting place.

Inter are said to be willing to listen to offers of around £55 million.

Christian Eriksen could be on his way out of Inter Milan just six months after joining the club from Tottenham. Danilo Di Giovanni/Getty ImagesMan City target Koulibaly and Varane

Manchester City are keen to find a new defense partner to play alongside Aymeric Laporte next season, and Pep Guardiola is being linked with Kalidou Koulibaly and Raphael Varane.

The Daily Star says that the City boss will have to spend £65m to take Koulibaly away from Napoli, where he has three years left on his contract in Naples.

Koulibaly, they say, is Guardiola's top target, and the Spaniard is said to be willing to pull out all the stops in an effort to strengthen his side ahead of their fresh assault on the Premier League title.

Meanwhile, it was discussed on the Transfer Window Podcast that with John Stones leaving the Etihad, Guardiola is keen to tempt Varane away from Real Madrid. They say that Varane is City's top target, not Koulibaly, but that it would be hard to lure him away from the Bernabeu.

What is most clear is that Guardiola is intent on finding a new defense partner for Laporte this summer.

Real Madrid are desperate to offload Luka Jovic this summer and they might have found themselves a buyer, with German side Hertha Berlin keen to take a punt on the Serbia star, according to Marca.

The Spanish outlet reports that Hertha, thanks to the backing of new major investor Lars Windhorst, see Jovic as the perfect addition to help them mount a serious title challenge next season.

Jovic has struggled at the Bernabeu under Zinedine Zidane but Hertha believe his form in Germany, in which he scored 27 goals during the 2018-19 campaign for Eintracht Frankfurt, is evidence that he can return to form in the Bundesliga.

Hertha could splash the cash this summer and Jovic could be the first of several big-money signings as they look to close the gap on Borussia Dortmund and Bayern Munich.

- The Illawarra Mercury says that Wollongong Wolves' Thomas James is a target for A-League side Perth Glory. The Australian top flight resumes this Friday after a four-month hiatus and the Glory are reportedly looking to bolster their forward options with the 2019 NSW NPL Golden Boot winner.

- Paris Saint-Germain sporting director Leonardo is keen to sign Luca Pellegrini, who is currently on loan at Cagliari from Juventus. Leonardo is looking for reinforcements on the left side of defence and Le10sport are suggesting that Juventus could be willing to sell the Italy under-20 international. Pellegrini hasn't had a chance to impress in Turin since his move from AS Roma last summer, and he might need to leave the Italian league leaders to play more first-team football.

- Napoli and Inter Milan are looking to raid AC Milan for Ivory Coast midfielder Franck Kessie, according to Calciomercato. The Rossoneri are keen to keep the 23-year-old but might be tempted to sell given that his price has risen dramatically in recent weeks, the result of three goals in consecutive games, against Juventus, Napoli and Parma. Kessie could return as much as €40m, which is why his agent is set for showdown talks with the club's management at the end of the season.