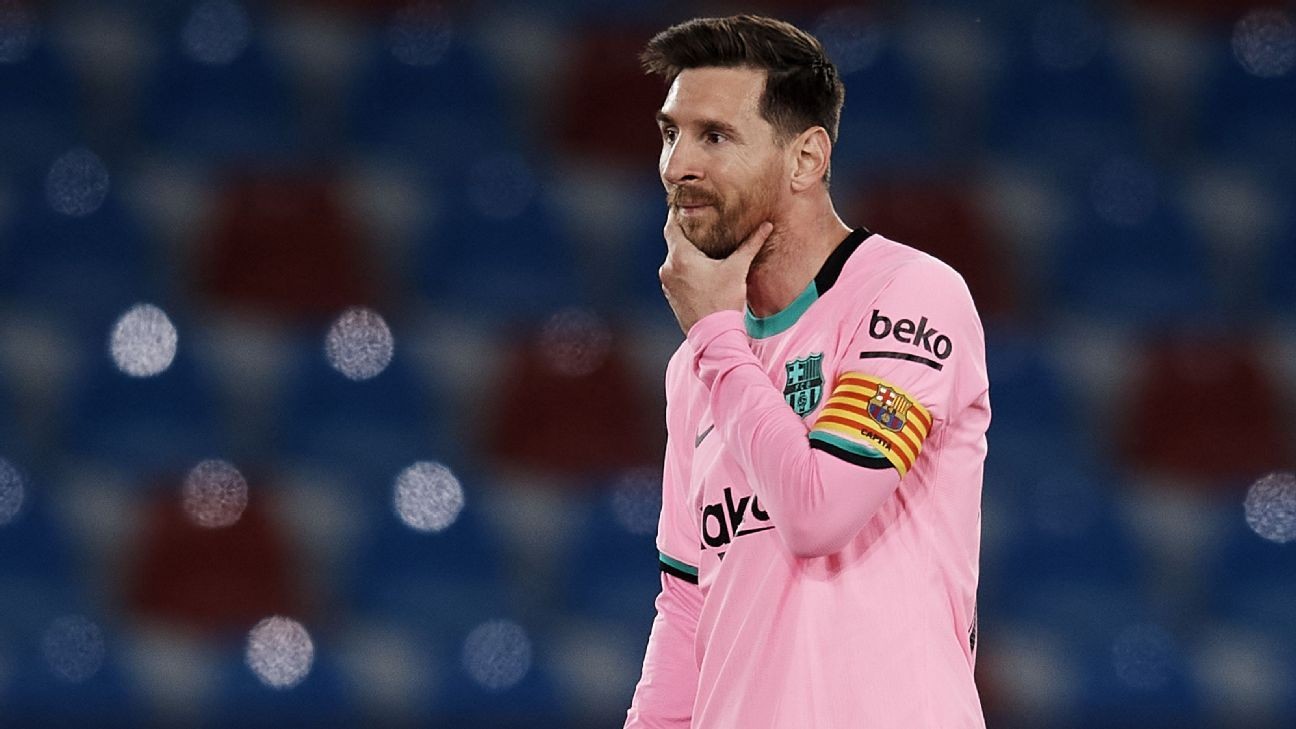 The summer transfer window is into its final month for the major European leagues, which means the biggest clubs are looking to make a splash in the market before the new season begins. Check out the latest gossip below, and see all official deals here.

TOP STORY: Where to now for Messi?

The news that Lionel Messi will be leaving Barcelona has rocked world football, and it has also inevitably got tongues wagging about where the Argentina superstar will go next.

The answer is that Manchester City is now the 34-year-old's most likely destination, according to Marca, despite Pep Guardiola's team having just spent big money on Jack Grealish.

- Marcotti: Breaking down how this Messi-Barca saga will play out
- Stream ESPN FC Daily on ESPN+ (U.S. only)

City's plan had been to also bring in Tottenham Hotspur's Harry Kane but, with the striker's deal far from complete, it is suggested that they may now turn their attention away from the England international and focus on reuniting Guardiola with Messi.

A move to Paris Saint-Germain is unlikely due to their financial losses, while they are focusing on ensuring they are able to renew Kylian Mbappe's contract after bringing in some big-name signings Sergio Ramos, Gianluigi Donnarumma, Achraf Hakimi and Georginio Wijnaldum.

Tax laws in France also make a move difficult, as for Messi to get €30 million-per-year, they would have to spend €70m per season.

Major League Soccer is also mentioned as an option that is still there, but the plan had always been for Messi to spend at least two more seasons at Barcelona.

Despite leaving Catalonia, the forward still reportedly intends on staying in Europe for the same period of time before heading across the Atlantic.

The news that Lionel Messi will be leaving Barcelona has rocked world football. Jose Breton/Pics Action/NurPhoto via Getty ImagesPAPER GOSSIP

- There is still a chance that Bayern Munich could sign RB Leipzig talisman Marcel Sabitzer, as has been reported by Kicker. The midfielder's contract comes to its culmination in the summer of 2022, which means Leipzig will need to offload the Austrian now or risk losing him for free, as he has already turned down an extension. Even so, there haven't been any serious talks with the Bundesliga champions yet.

- Juventus are showing an interest in reuniting Barcelona midfielder Miralem Pjanic and, according to Calciomercato, the feeling is mutual as the Bosnia & Herzegovina international has his heart set on a return to Turin. Juventus are working on a deal that could be a loan or permanent one at this stage.

- New England Revolution have made a deal in principle with Club Brugge for Tajon Buchanan to join the Belgian outfit for around US$7m, reports Tom Bogert. This deal would include the 22-year-old being loaned back to New England. It's not yet completed with personal terms still to be agreed, while two Bundesliga clubs remain in the race.

- Napoli are hoping to sign Sheffield United midfielder Sander Berge, as has been reported by Calciomercato. The Serie A outfit are hoping for a loan deal with a right to make it permanent, but the Blades want an immediate deal worth €15m. Borussia Monchengladbach's Denis Zakaria and Chelsea's Tiemoue Bakayoko are seen as alternatives.

- Crystal Palace have made some exciting signings this summer and Blackburn Rovers striker Adam Armstrong could be added to their list of acquisitions, reports the Daily Mail. It is suggested that the Eagles are ahead of Norwich City and Southampton in the race to sign the 24-year-old.