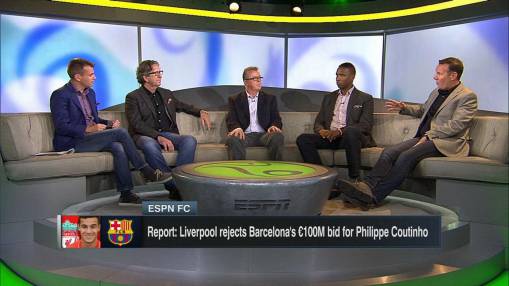 Thursday's latest stories from the world of football in ESPN FC's What's Trending...

LIVERPOOL: Liverpool have rejected a second bid from Barcelona for Philippe Coutinho, a source has told ESPN FC.

- Barcelona believe they have reached an agreement with Liverpool to sign Philippe Coutinho after the Brazilian put pressure on the Premier League club to let him leave, sources close to the Catalan club told ESPN Deportes' Jordi Blanco.

- WATCH: How would Liverpool line up without Coutinho?

- Jurgen Klopp says Liverpool are focused on their opening Premier League fixture against Watford before thinking about the important Champions League qualifying game against Hoffenheim next Tuesday.

MAN UNITED: Jose Mourinho says the weight of expectation on Manchester United is hampering their bid to reclaim a place at the top of European football -- and believes it will take two more years to get back to the top.

- Nemanja Matic is confident Manchester United will perform well in the Premier League despite their Super Cup setback against Real Madrid.

TOTTENHAM: Tottenham defender Danny Rose has said he would consider offers to leave the club and he has "probably only got one big contract left in me."

REAL MADRID: Gareth Bale says he is ready to fight Kylian Mbappe for his place at Real Madrid instead of swapping the Bernabeu for Manchester United this summer.

ARSENAL: Arsene Wenger has ruled Alexis Sanchez out of Arsenal's Premier League opener with Leicester on Friday due to an abdominal strain.

NEWCASTLE: Rafa Benitez says he has spoken with Arsenal boss Arsene Wenger over the possibility of signing Lucas Perez, but faces competition from the striker's former club Deportivo La Coruna.

INTER MILAN: Inter have signed defender Dalbert from Nice, with the full-back signing a five-year contract on Tuesday after undergoing a medical.

PSG: The president of the French Football Federation (FFF) has told L'Equipe he is confident that Neymar will soon be able to make his Paris Saint-Germain debut.

CHELSEA: Antonio Conte has conceded that Nemanja Matic's move to Manchester United is a "great loss" for Chelsea and reiterated that more signings are required for the Blues to have any hope of defending their Premier League title this season.

MEXICO: Rafael Marquez has categorically denied any connection to a drug trafficking organization after being sanctioned by the U.S. Treasury Department on Wednesday.

- Sporting Kansas City beat the San Jose Earthquakes 5-4 on penalties on Wednesday night to reach the final of the U.S. Open Cup.