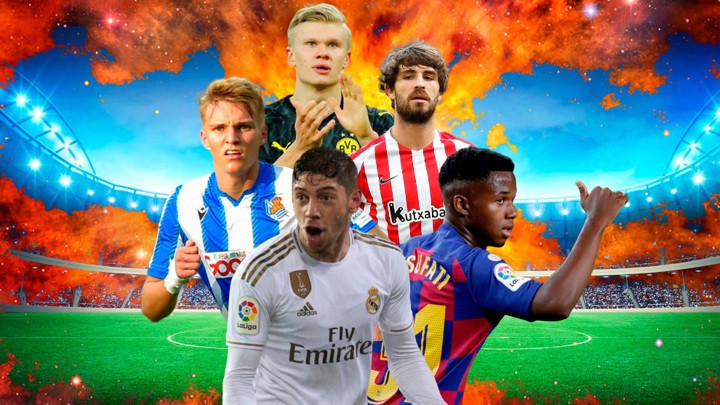 Before the season was postponed because of the coronavirus pandemic, a number of prospects were beginning to show what they are capable of.

What they all have in common is that they started the year further down the pecking order but, as the months went by, they stepped up at their respective clubs and became vital players.

A clear example of this is seen with Martin Odegaard. The Norwegian playmaker has become the brains of this Real Sociedad team, who have reached the Copa del Rey final and have dazzled their supporters with their exciting brand of football.

Odegaard's impressive performances has led to many believing that he should return to Real Madrid a year earlier than had originally been planned.

At present, the 21-year-old has scored four goals and provided five assists with 11 matches left in LaLiga Santander.

Another example can be found at the Estadio Santiago Bernabeu with Fede Valverde. The Uruguayan has become one of the first names on the team sheet this season.

Valverde's physical attributes have complemented some of the more experienced members of the Real Madrid midfield, and while many people were discussing Paul Pogba, he has carved out a place of his own in the XI.

Yet another Real Madrid player has shown his talent this year in the form of Rodrygo Goes.

In his first season in the Spanish capital, and after playing several matches with Castilla, the Brazilian has managed to score seven goals (four of them in Champions League) in 28 games.

In the period before the coronavirus-enforced stoppage of football, Rodrygo was not a guaranteed starter but will no doubt be an important player for Real Madrid moving forward.

Los Blancos have a plethora of young prodigies at the club, however one that has shown his talent away from the Bernabeu is Leganes loanee Oscar Rodriguez.

The playmaker has regularly stepped up for Javier Aguirre's side, especially since the departures of Youssef En-Nesyri and Martin Braithwaite, and he has scored some important goals for Los Pepineros.

If Leganes are to defy the odds and avoid relegation, the form of Oscar will be integral for them.

Barcelona also have a young player who has shown his ability this year: Ansu Fati.

The 17-year-old is experiencing a similar campaign to what Vinicius Junior had last year at Real Madrid, but with more goals.

So far, Ansu has netted five goals and provided one assist in 24 matches across all competitions.

At Athletic Club, Yeray Alvarez has shown that he is one of the best up-and-coming defenders in Spain.

A key player for the Basque side, his excellent displays have helped them reach the Copa del Rey final.

One of the revelations of this season has been Marc Cucurella at Getafe.

The former Barcelona player, who came through the ranks as a left-back but now plays as a left midfielder, has played almost 3,000 minutes of football this season and has built on the successful loan spell he had at Eibar in the 2018/19 campaign.

At 21, Cucurella has been able to demonstrate his qualities under Jose Bordalas.

Ferran Torres has become a regular at Valencia and that has attracted interest from some of the biggest teams in Europe.

The right winger has played 2,622 minutes across 35 games, scoring six goals (two in Europe), and it already seems clear that, if he signs a new contract, he will be the player Valencia begin to build around.

Prodigies outside of Spain

There are some exceptional youngsters who have burst onto the scene this season.

In more defensive positions, Eduardo Camavinga, who has attracted interest from Real Madrid, has been very solid in the 2,783 minutes he's played at Rennes, while Bayern Munich left-back Alphonso Davies (2,500 minutes as a 19-year-old) also deserves to appear in this list.

These players will be looking to take a further jump when the 2020/21 season gets underway.