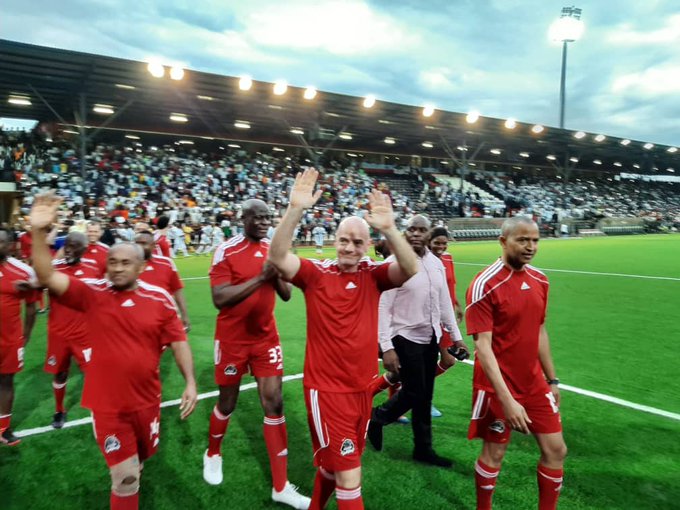 Infantino and Ahmad were mobbed by football fans in Lumumbashi

The President of FIFA Gianni Infantino and CAF President Ahmad Ahmad played in the gala match commemorating the 80 years of existence of TP Mazembe in Lubumbashi on Wednesday.

The match between the FIFA team and the legends of TP Mazembe team ended in a 2-1 victory for FIFA  at the Mazembe stadium in Kamalondo.

Gianni Infantino and Yuri Djorkaeff scored for the FIFA Legends, while Serge Lofo Bongeli scored the only goal for the Mazembe alumni.

On the side of TP Mazembe legends there was Serge Lofo Bongoli, Eric Nkulukuta, Robert Kidiaba, Pamphile Mihayo (current coach of Mazembe), Kasongo Ngandu (coach of Don Bosco) played in the jersey of the Ravens in front of the cheering crowd.

The world number one football administrator and his delegation were invited in the evening for a dinner over the anniversary celebrations.

His agenda includes a visit to Mazembe's facilities on Thursday, followed by a press conference before leaving DR Congo.