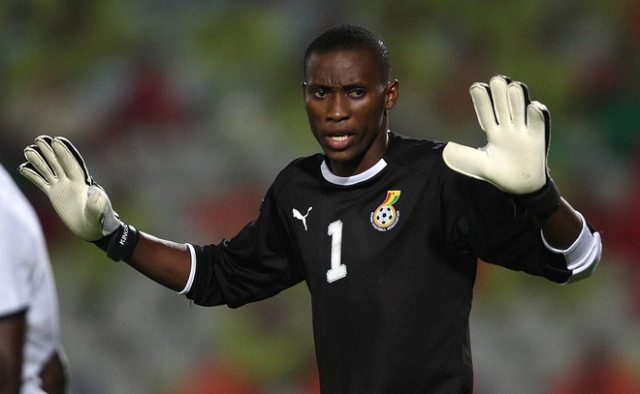 Former Ghana youth goalkeeper Daniel Agyei has narrated how a pastor revealed to him that he had been tied up spiritually to wreck his career.

There is a long-held suspicion that African players have been engaging in black magic to either enhance their careers or wreck a career of their fellow professionals.

In a chilled story narrated by Daniel Agyei, the former Liberty Professionals custodian disclosed how his career was wrecked by black magic but did not go further by naming the perpetrator.

"Only my family are aware of what I'm about to disclose to you. I hate to talk about it but I believe it's time to reveal it so that the upcoming footballers will know how to deal with it when it happens to them," Agyei told Jeffries Sintim Koree Chaskele on Television CK.

"Up till now I don't believe it happened to me even though people were telling. There are pastor and fake ones out there but I listened to all that they told me. I'm alive today so whatever the enemy planned for me has gone down the drain, but it got to a time where I had a strong feeling that things were not moving as they should and I felt so bad but I thought it's normal because in everything you do there's a good and bad day until a pastor told me that the ordeal I was going through was the work of the devil."

"I didn't believe it at first because I know it's part of life to go through bad patch. Even Christ who died to save our lives went through tribulation so even when people where telling me to pay attention to what I was going through, I know that when impediment comes your way, God is preparing you for another stage so when people were telling about my friend having a hand in my misfortune, I didn't believe them because I knew God was preparing me for another stage. That's my mantra since I started my career."

"I went through so many challenges. When I came back from the 2010 World Cup things became very rough for me. My performance level in the league dropped drastically but I thought it was fatigue but people started telling me things which drew my mind unto what the pastor disclosed to me."

"But I quite remember that the pitches we played on during the U20 World Cup in Egypt were heavily watered unlike the pitches we use in Ghana. In Ghana because the pitches were not watered when a ball bounces on it, you know very well that the ball is coming straight into your arms so it got me confused in the league which made me commit so many mistakes. I knew people were thinking that how can a World Cup goalkeeper be performing this poorly but I knew what I was dealing with."

"The pastor revealed so many things to me which got into my head. He told me how I'd been tied up spiritually. He said some people were working to bring me down so that I wouldn't be able to have a career abroad but I was so stubborn in dealing with it because I'm one person who believes in the spiritual realms so I was confident that nobody can harm me unless the person went through any of my family members but I know how my family are strong spiritually therefore nobody can penetrate to harm me."

"So many pastors were telling me to be careful but I'm one person who doesn't tell people my story, only my family members know about what I'm revealing to you now."

The 30-year-old goalkeeper is currently in the books of Ethiopian Premier League club Sebeta City.

Agyei represented Ghana at U-20 level and won with the team both the 2009 African Youth Championship and the 2009 FIFA U-20 World Cup.

He was part of the Black Stars team that finished second to Egypt at the 2010 Africa Cup of Nations in Angola and also a member of the squad that reached quarter final stage at the 2010 FIFA World Cup in South Africa.

He has won 5 caps for the Ghana Black Stars.