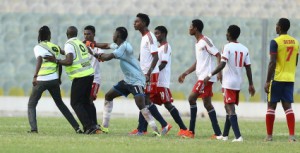 WAFA are facing heavy sanction from the Ghana FA after their players allegedly abusing medical staff of the St John Ambulance team during a Premier League match against Hearts in Accra.

Players of the Sogakope-based side put up the cowardly and shameful act after their 1-1 stalemate with the Phobians in Accra.

The St Johns Ambulance officials have petitioned the country's National Sports Authority to sanction the club for failing to control their players.

The National Sports Authority is expected to forward the complaints to the Ghana FA for an appropriate action to be taken.

Players were seen in a physical tussle with the medical staff after they attempted to stretch a player off.

WAFA players have been roundly condemned for their conduct with the Ghana FA expected to come heavy on the team.