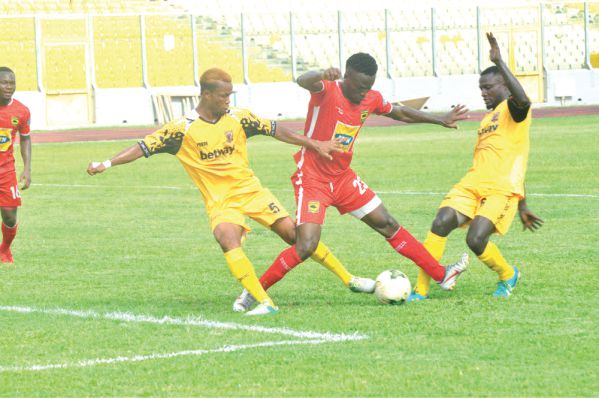 Ashantigold defender Richard Osei Agyeman says they are ready for Asante Kotoko in the BK Edusei Cup on Sunday.

The regional rivals face each other at the Baba Yara Stadium for the memorial match tomorrow.

Agyemang, a former player of the Reds says the Miners are poised to beat the Porcupine Warriors.

"We are very ready for the game against Kotoko on Sunday in the BK Adusei Foundation cup," the 24-year old told Ashh FM Sports.

"We have the best players with the best striker who can score hat trick in less than 9 mins in an African game.

"Ashgold SC will win the BK Adusei Foundation cup on Sunday against Kotoko.

"The game would be nice and entertaining because we are coming to entertain the supporters who will come to the stadium on Sunday," he said.

Ahead of the big game, there has been a raging debate over who the best midfielder is in the country between Justice Blay and James Akaminko.

"Justice Blay has his style of play as compared to James Akaminko but they are all good when it comes to the holding role," Agyeman said.

"I will entreat all the supporters to come to the stadium on Sunday to support the BK Adusei Foundation because it's a good initiative."