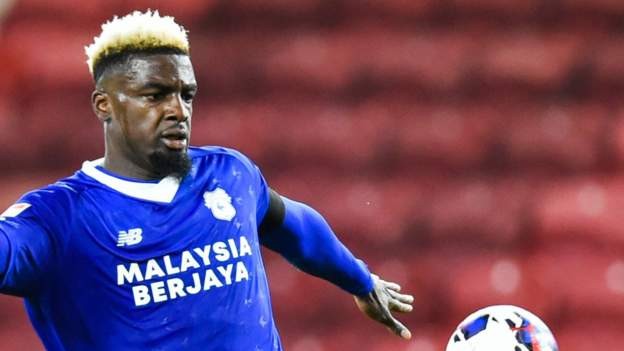 Cardiff boss Mark Hudson says there is no recall clause in the loan deal for West Bromwich Albion's Cedric Kipre.

The 25-year-old has impressed this season while West Brom are in the bottom three after defeat at Preston.

But Cardiff confirmed there is no arrangement for Kipre to be recalled in January.

"We have spoken to him about his consistency of performance and he is showing that at the moment" Hudson said.

"He has been good we were a little bit worried when he came off with two knocks (against Blackburn).

"But he put himself back out there on Tuesday and showed what he is about. But he has to show it again on Saturday and again and again. "

The Ivory Coast international was outstanding in Tuesday's 1-0 win over Blackburn which helped Hudson to his first victory as interim manager, having began his reign with a draw against Burnley.

But the Blackburn victory came at a price with consistent right back Mahon Romeo limping off with an ankle injury which looks certain to rule him out of Saturday's clash at Kipre's former club Wigan.

"It has settled better than it looked after the game but it is looking likely he will probably miss the weekend. We are waiting on news on the timescale for that one," Hudson added.

Perry Ng, who moved to right back from central defence on Tuesday night, could again switch, allowing Jack Simpson to start in he centre back role alongside Kipre.

Cardiff have yet to earn back to back wins together this term and Hudson said: "There is always a first time so we are going to go up there with a bit of confidence from the (Blackburn) game and the way we have played over the last two.

"But as I have said already, you have to play with that intensity and togetherness at home or away."

Wales international Rubin Colwill is still sidelined with a hip flexor injury, while Isaac Davies is beginning a comeback from a knee problem.

The club hope Gambian international midfielder Ebou Adams will have recovered from a shoulder injury in time to play a part before the World Cup break.