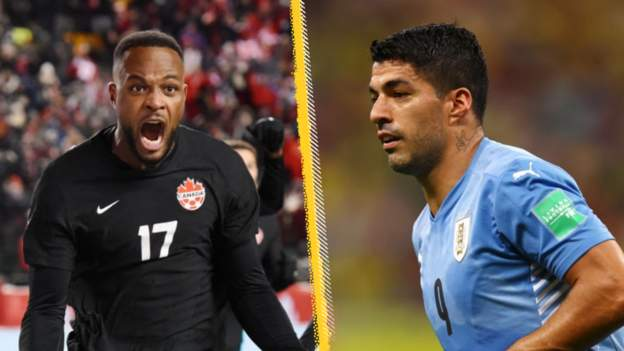 Will Luis Suarez and Edinson Cavani take Uruguay to the World Cup in Qatar?

The World Cup in Qatar is now less than 10 months away - but there is still plenty to decide before the tournament kicks off.

Thirteen teams have already secured their spot ahead of the opening game on 21 November, but that means there are still 19 places up for grabs and some big hitters struggling to make it.

To make sure the World Cup qualifying process can finish this summer, Fifa has created an extra international window, taking place from 24 January to 2 February.

So, while European clubs have been afforded a winter break with their qualification up to date, it could prove a key couple of weeks for those in South America, Asia and the Concacaf region, which features sides from North and Central America and the Caribbean.

BBC Sport takes a look at how qualification is panning out.

The exit of a world giant? - South America

They have won the World Cup twice. haven't missed a tournament since 2006 and boast the likes of Atletico Madrid's Luis Suarez and Manchester United's Edinson Cavani in their ranks, but Uruguay are in real danger of missing out on Qatar.

Four defeats in a row leave them seventh in South American qualifying with four matches remaining, ahead of crucial matches against Paraguay on Thursday and Venezuela on Tuesday 1 February.

The top four South American nations qualify directly, while the fifth-placed side can advance via inter-continental playoffs featuring three other nations from Asia, Concacaf and Oceania, with Brazil and Argentina already through.

It is far from terminal for La Celeste though, who are just one point behind fourth-placed Colombia and have recently sacked manager Oscar Tabarez - after a 15-year reign - and replaced him with former Inter Miami boss Diego Alonso.

This is how the current qualifying table looks.

It could prove to be a huge few months for Canada, who sit top of the Concacaf table, undefeated with 16 points from eight games.

With three teams to qualify automatically and fourth place to go into an intercontinental play-off against the winner of the Oceanian qualification, they look well placed to make their first World Cup finals since 1986 - their only appearance.

Canada travel to Honduras on Thursday, 27 January before a home match against the United States of America on Sunday, 30 January.

It appears to be a four-team battle for the automatic qualification places, with just two points separating top of the table Canada with fourth-placed Panama.

West African rivals Nigeria and Ghana will play each other for a place at the World Cup, in arguably the pick of a number of dramatic-looking ties following Saturday's play off draw for Africa's five places in Qatar.

Elsewhere Sadio Mane's Senegal will play Mohamed Salah's Egypt, while the only team in the draw to have never been at a World Cup, Mali, face Tunisia. The matches will take place at the end of March.

Liverpool's Sadio Mane and Mohamed Salah will go head-to-head for a place in the World Cup when Senegal face EgyptTrouble for Australia? - Asia

Australia have qualified for the past four World Cups but, currently lying third in Group B, are far from guaranteed a place in Qatar.

The top two teams in each group qualify automatically for the World Cup, with the two third-placed sides playing off for a place in an Intercontinental play-off against the fifth-placed side in South America for another spot at the finals.

Iran and South Korea look to have qualification sewn up in Group A, but only four points separate Saudi Arabia, Japan and Australia in Group B with four games remaining.

Australia know they can't afford many more slip ups as they entertain Vietnam on Thursday 27 January and travel to Oman on 1 February.

Oceania will stage a nine-team tournament in Qatar in March to decide which team advances to an intercontinental play off for a spot at the World Cup finals.

The winner of the 14-30 March competition will face the fourth-placed team from the Concacaf region.

New Zealand were the last country from the region to qualify for the World Cup when they played in South Africa in 2010. They missed out on a place in Russia in 2018 after losing to Peru in a play off.

An exit for the European champions? - Europe

There is still plenty to play for in Europe with the likes of Italy, Portugal, Wales and Scotland all facing play-off semi-finals in March.

There could be one big casualty with Italy and Portugal due to meet in a final - if they both get past their semi-finals.