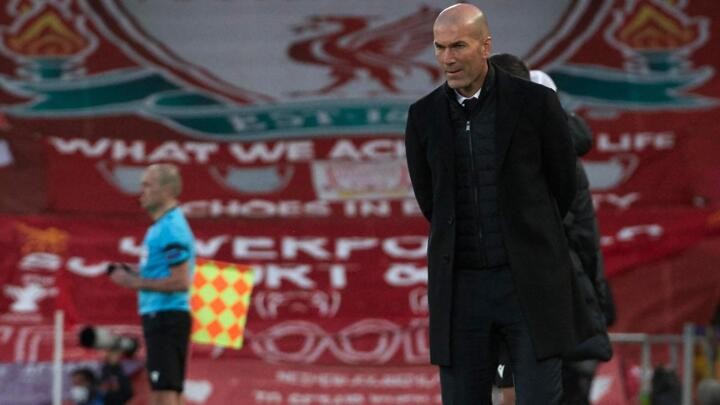 Zinedine Zidane reacted after Real Madrid "rode the storm" to progress to the Champions League semi-finals at the expense of Liverpool.

Madrid booked a semi-final berth for the first time since 2018 after Wednesday's 0-0 draw away to Liverpool secured a 3-1 aggregate victory.

Los Blancos, who are only a point adrift of city rivals Atletico Madrid with eight games remaining in LaLiga, have qualified for the semi-finals of the European Cup/Champions League for the 30th time – at least 10 more than any other team as Chelsea await in the final four.

Zidane: "We've not won anything yet"

Zidane led Madrid to three consecutive Champions League titles between 2015 and 2018, and after eliminating Premier League holders Liverpool, the Frenchman said: "We're all pulling together and this side always does that and it always wants more.

"We've not won anything yet, but we're alive in Europe and the LaLiga."

Without the likes of captain Sergio Ramos and Raphael Varane at Anfield – Madrid benefited from Liverpool's wastefulness after the likes of Mohamed Salah, Georginio Wijnaldum and Roberto Firmino all had chances.

Madrid, who seized control of the tie thanks to Vinicius Junior's first-leg brace, weathered the storm – the Spanish giants have now progressed from 11 of their 12 two-legged knockout ties in the Champions League under Zidane, with the club's only elimination coming against Manchester City in last season's round of 16.

"We were up against it and we knew we had to suffer tonight, but in the end we got what we wanted, which was to go through," said Zidane, who has reached the Champions League semi-finals for the fourth time as a coach, more than any other French manager in the history of the competition – surpassing Arsene Wenger.

"I think we handled the game well, we rode the storm and can be proud of our display.

"We knew they'd start fast and they were really good in the opening 15 minutes, but that's normal. In the quarter-finals of the Champions League you have to dig in and we did that and got through."

Madrid have faced Chelsea more often without winning than any other side in their entire history, failing to win in all three games against the Premier League outfit (D1 L2), while their upcoming semi-final encounter will be their first ever Champions League meeting.