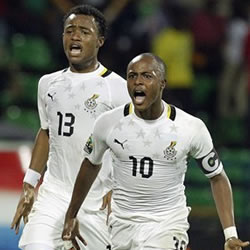 Andre Ayew's professionals football match will come off on Friday toÂ honourÂ the memory of Jordan Anagblah who passed away on Thursday morning.

The event which was originally scheduled to come off on Thursday afternoon had to be cancelled following the news of the painful demise of the Ghana FA's Vice President.

Host, Andre Ayew who is recovering after undergoing a successful shoulder surgery will be one of the the coaches for the game which will see the players wear black armbands and reserve a minute of silence in memory of the departed Anagblah.

The game was primarily organized to keep up the fitness level of the players who are on post-season holidays while strengthening already existing bonds.

It was also to serve as an opportunity for the professionals to interact with their numerous fans and the media.

Thursday's sad development has however undoubtedly raised the profile of this game beyond being just a fun fitness game.

The match will kick off at 3pm local time at the Nania Park in Legon.