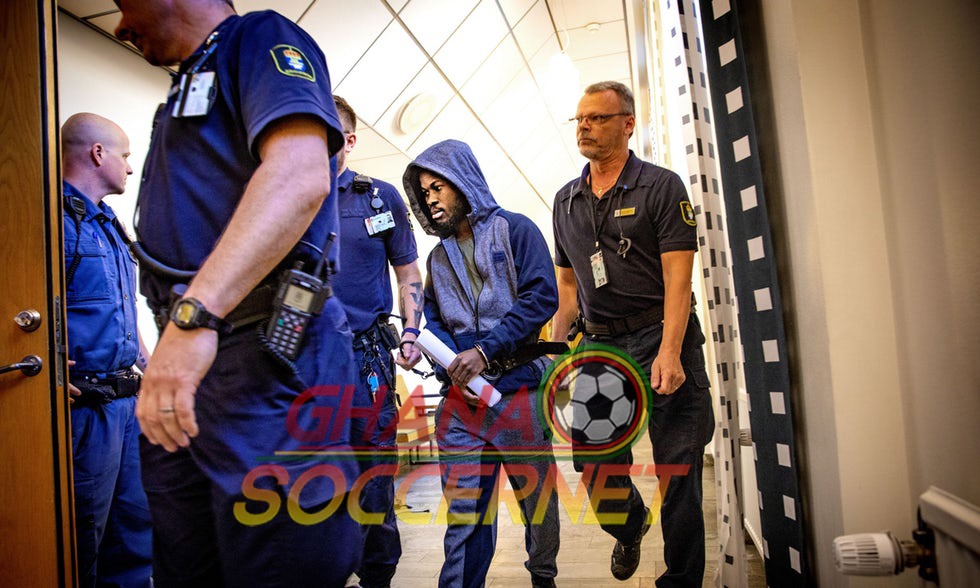 Kingsley Sarfo when he arrested by the Swedish police

Hugely talented Ghana winger Kingsley Sarfo has confirmed that he been released from prison in Sweden earlier than expected.

The 24-year-old has been released after fresh evidence emerged that he might have been convicted on wrong grounds after his lawyers presented the evidence on appeal.

The winger has now been allowed to go to his home in the European country and has not been deported to Ghana per the original ruling.

The former Malmo midifelder was released early last week following the revelation that his 24 months incarceration over the rape of an underage girl could have been wrong.

Sarfo was charged with rape of an underage girl, which saw him sentenced to jail in Sweden for two years and eight months.

The new evidence from Sarfo's case indicates the girl in question was 15-years old and not 14 as it was stated in the case which would not have been a crime in Sweden.

"I am now out of prison in Sweden. I was released five days ago," Sarfo told Kumasi-based Angel FM on Thursday.

"I thank the Almighty God for this great day. Thanks to my fans, family, friends and everyone for their unflinching support and prayers during the hard times"

"As it has been said that there is grace in disgrace. We [Me and lawyers] are seeking for justice after the unlawful twenty-two months behind bars"

He was jailed for two years and eight months in the European country for two child rape counts, a Malmo District Court ruled in June 2018.

His appeal to have the sentence overturned was rejected five months later was rejected, ensuring that he would spend all the months in prison.

The midfielder, who took Sweden by storm with his speed and great dribbling ability, is the second Ghanaian player to be jailed in the European country following the ordeal of Kwame Bonsu.

Bonsu returned home to play for giants Asante Kotoko just for one season before he was snapped up by Tunisian giants Esperance following his exploits in Confederation Cup.

Sarofo pleaded not guilty to the allegation levelled against him because he knew the girl was not under-aged, there were claims that then 23-year-old.

When he was arrested it became glaring that the Ghanaian will be convicted after a heartbreaking picture of talented Ghanaian emerged with the enforcer in handcuffs and shackles like a terrorist as he arrived in a Swedish court from prison for the start of his rape trial.

The Malmo District Court presided over prosecutor Rikard Darell passed judgment on the former Sirius midfielder as he has been sentenced to two-years and eight month jail sentence.

The judge ruled that Sarfo must be deported from Sweden after serving his jail term.

Coach Kwesi Appiah handed Sarfo his maiden Black Stars call-up when he was invited for Ghana’s FIFA World Cup qualifier against Uganda two years ago but the allegations surrounding him curtailed his international career.