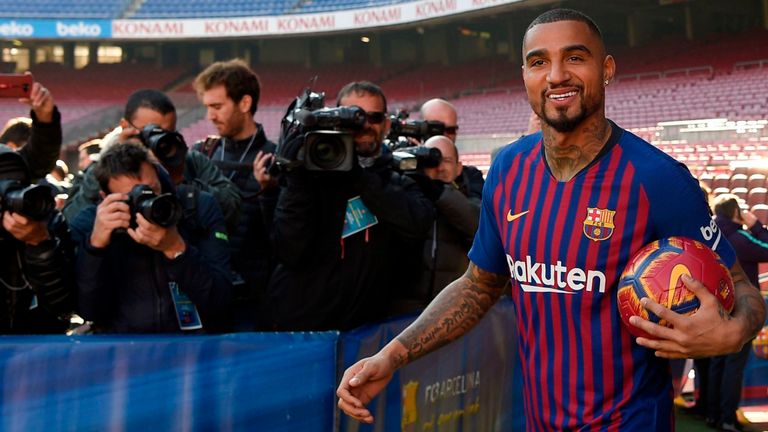 From Las Palmas to Eintracht Frankfurt to Sassuolo, few would have predicted a move to a big club for Kevin-Prince Boateng especially at age 31. However, against all odds, Barcelona has surprisingly signed Boateng on loan from Italian club Sassuolo till the end of the season with an option to buy for 8 million Euros.

The Blaugrana had three requirements for a new forward: La Liga experience, cheap and willing to sit on the bench. Boateng ticks all three boxes. Boateng, who plays as a midfielder and sometimes, as a forward will only make this Barcelona side better and here is why.

Kevin-Prince Boateng has been deployed as an attacking midfielder for most of his career, something that he was going to say goodbye to after meeting De Zerbi – the coach of Sassuolo.

De Zerbi was persuaded that although Boateng had spent majority of his career playing as an attacking midfielder, he could be used efficiently as a false nine instead.

"He's a total footballer," the Sassuolo coach declared before the season began. "He can play any role and by playing in that position up front, he is able to lift the whole team."

Those words by De Zerbi proved to be prophetic, with the Ghanaian international scoring his first goal in the Coppa Italia before finding the back of the net three times in his first five Serie A outings.

It is worth pointing out that Boateng has never been a clinical player as the former AC Milan player has just reached double figures once in his illustrious career. It was only in the 2016/2017 La Liga season when he scored 10 goals for Las Palmas. Including a goal against Real Madrid at the Bernabeu and another deserving of the goal of the season title against Villareal. Quique Setién, then coach of Las Palmas, deployed Boateng as an out and out striker and Boateng repaid the faith of Setién had in him.

Boateng has been brought in as a backup for Luis Suarez with the games coming in thick and fast in the second half of the season. Boateng, who has the ability to play as a midfielder and as a forward becomes another attacking option for coach Ernesto Valverde as Barcelona remain in contention for the Spanish league, the Copa del Rey, and the Champions League.

In tight and cagey games, Boateng can influence matches from the bench with his technical ability and knack for the unexpected. His versatility also means he can provide cover for midfield and attacking positions. At the moment, his designated role at Camp Nou may be to serve as the understudy of Luis Suarez but, knowing Boateng, he will definitely play a significant part in Barcelona’s season.

“I know I won’t get to feature a lot but I am ready to work for the team whenever I am called. I hope to impress enough to stay at Barca longer.” Kevin-Prince Boateng said to the press.

Boateng is a quick, dynamic, physically strong and well-rounded midfielder, known for his aggression, eye for goal, long-range shooting ability, flair, footspeed, ball-juggling tricks, and dribbling skills. A versatile and tenacious player, his game has a particular dependence on "sheer strength, power and energy."

He can produce the work rate, ball retrieval and attacking willingness of a box-to-box midfielder. He combines technical skill with the speed of action which makes him more dangerous. A 2014 profile on FIFA's official website described Boateng as "blessed with strength, speed, killer instinct in front of goal, and an uncommon flamboyance in the attacking third”.

Boateng has been utilised in many midfield positions throughout his career, but usually plays either in the centre in a box-to-box role, or as an attacking midfielder or forward; he has also been deployed as a false-attacking midfielder, as a second striker, or even as a winger on occasion during his time with Milan. With Las Palmas and Sassuolo, he was also deployed in a more advanced, central attacking role, essentially positioned as a lone striker, but effectively functioning as a false 9, due to his ability to drop deep, link-up with midfielders, and create space for his other attacking teammates with his movement off the ball.

In addition to his playing ability, Boateng is known for his acrobatic goal celebrations and often celebrates scoring goals with a backflip. He celebrated AC Milan’s title win by disguising himself as Michael Jackson and showing his incredible dancing skills. His former Eintracht Frankfurt coach Niko Kovač has also praised Boateng for his leadership, stating: "Kevin gives the team a sense of stability, both mentally and physically," also describing him as a "warrior."

With just 6 months to make a case for himself, Kevin-Prince Boateng knows that he has to hit the ground running. The environment from a highly expectant Blaugrana club will pile a lot of pressure on any new player. The pressure that Boateng would savour because he is used to the big stage. The 31-year-old has featured for 10 clubs prior to joining FC Barcelona. He has played for sides such as Tottenham Hotspurs, Borussia Dortmund, AC Milan and Schalke 04. Indeed, he is a candidate for journeyman of the 21st century.

These clubs did present Boateng the opportunity to play in some of the most prestigious competitions in the world including the UEFA Champions League – a competition that Barcelona are eager to win this year. Of course, Barcelona fans do not want to hear Boateng’s name and the Champions League together because the Ghanaian international has scored twice against Barcelona in the competition whilst playing for AC Milan. A sign that he can do it on the big stage.

Speaking of big stages, there is no stage bigger than a World Cup at least in football terms. In 2010, Kevin-Prince Boateng played an influential role as Ghana equalled an African record by reaching the quarterfinals. Against USA in the round of 16, Boateng picked up the ball from the halfway line and bamboozled his way past his opponents before he scored with a left footed shot outside the penalty area. His outstanding performances in the World Cup earned him a move from Portsmouth to AC Milan where he won the 2010-2011 Serie A and the 2011 Supercoppa Italiana.

Kevin-Prince Boateng’s transfer to Barcelona is a move that shocked the world including the Ghanaian international but he stands a chance of making an impact. Although the 31-year-old has a track record of getting injured – 29 injuries since 2009. Once fit, his ability to play across midfield and attack coupled with his large basket of experience can only help make FC Barcelona better. With the games flying in from now till May, expect Kevin Prince Boateng to not just take the burden off Luis Suarez but also contribute to the team substantially.